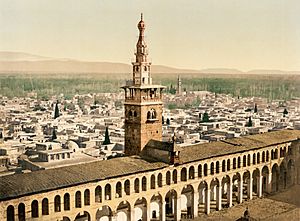 Umayyad Mosque, a place where Ibn Taimiyya used to give lessons

Ibn Taymiyyah (661-728 AH/ 1263-1328 CE) is regarded as one of the prominent Sunni Islamic scholars and mujaddids (renewers or revivers) of Islam. His full name is Ahmad ibn Abdul Haleem ibn Abdus Salam ibn Taymiyyah. His titles are Sheikh al-Islam, the Imām, the Scholar, the Mufassir (Exegete), the Faqīh (Jurist), the Mujtahid, the Hāfidh, the Muḥaddith (master of hadith). He was a member of the islamic jurisprudence school founded by Ahmad ibn Hanbal. He was notable for wanting to return Islam to what he viewed as earlier interpretations of the Qur'an and the Sunnah. He lived during the troubled times of the Mongol invasions in Syam. He is the most influential teacher of Ibnul Qayyim.

All content from Kiddle encyclopedia articles (including the article images and facts) can be freely used under Attribution-ShareAlike license, unless stated otherwise. Cite this article:
Ibn Taymiyyah Facts for Kids. Kiddle Encyclopedia.