The honorific Muhiyudin denotes his status with many Sufis as a "reviver of religion". Gilani (Arabic al-Jilani) refers to his place of birth, Gilan. However, Gilani also carried the epithet Baghdadi, referring to his residence and burial in Baghdad.

Gilani's father, Abu Saleh, was from a Sayyid lineage, tracing his descent from Hasan ibn Ali, a grandson of the Islamic prophet Muhammad. Abu Saleh was respected as a saint by the people of his day, and was known as Jangi Dost (meaning "fight-lover" in Persian), which was originally his father's sobriquet. Gilani's mother, Ummul Khair Fatima, was also a Sayyid, having been a descendant of Muhammad al-Jawad, himself descended from Husayn ibn Ali, the younger brother of Hasan.

Gilani spent his early life in Gilan, the province of his birth. In 1095, at the age of eighteen, he went to Baghdad. There, he pursued the study of Hanbali law under Abu Saeed Mubarak Makhzoomi and ibn Aqil. He studied Hadith with Abu Muhammad Ja'far al-Sarraj. His Sufi spiritual instructor was Abu'l-Khair Hammad ibn Muslim al-Dabbas. (A detailed description of his various teachers and subjects are included below). After completing his education, Gilani left Baghdad. He spent twenty-five years wandering in the deserts of Iraq.

Al-Jilani belonged to the Shafi'i and Hanbali schools of law. He placed Shafi'i jurisprudence (fiqh) on an equal footing with the Hanbali school (madhhab), and used to give fatwa according to both of them simultaneously. This is why al-Nawawi praised him in his book entitled Bustan al-'Arifin (Garden of the Spiritual Masters), saying: "We have never known anyone more dignified than Baghdad's Sheikh Muhyi al-Din 'Abd al-Qadir al-Jilani, may Allah be pleased with him, the Sheikh of Shafi'is and Hanbalis in Baghdad."

In 1127, Gilani returned to Baghdad and began to preach to the public. He joined the teaching staff of the school belonging to his own teacher, al-Mazkhzoomi, and was popular with students. In the morning he taught hadith and tafsir, and in the afternoon he held discourse on the science of the heart and the virtues of the Quran. He was said to have been a convincing preacher and converted numerous Jews and Christians. He was able to reconcile the mystical nature of Sufism with the sober demands of Islamic Law. 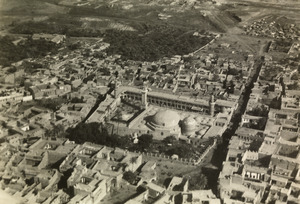 Gilani died on 21 February 1166 (11 Rabi' al-Thani 561 AH) at the age of 87. His body was entombed in a shrine within his madrasa in Babul-Sheikh, Rusafa on the east bank of the Tigris in Baghdad, Iraq.

During the reign of the Safavid Shah Ismail I, Gilani's shrine was destroyed. However, in 1535, the Ottoman Sultan Suleiman the Magnificent had a dome built over the shrine, which still exists. 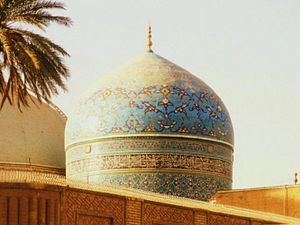 All content from Kiddle encyclopedia articles (including the article images and facts) can be freely used under Attribution-ShareAlike license, unless stated otherwise. Cite this article:
Abdul Qadir Gilani Facts for Kids. Kiddle Encyclopedia.