He was born at Nawa near Damascus, Syria. As with Arabic and other Semitic languages, the last part of his name refers to his hometown.

Yasin bin Yusuf Marakashi, says: "I saw Imam Nawawi at Nawa when he was a youth of ten years of age. Other boys of his age used to force him to play with them, but Imam Nawawi would always avoid the play and would remain busy with the recitation of the Noble Qur'an. When they tried to domineer and insisted on his joining their games, he bewailed and expressed his no concern over their foolish action. On observing his sagacity and profundity, a special love and affection developed in my heart for young Nawawi. I approached his teacher and urged him to take exceptional care of this lad as he was to become a great religious scholar. His teacher asked whether I was a soothsayer or an astrologer. I told him I am neither soothsayer nor an astrologer but Allah caused me to utter these words." His teacher conveyed this incident to Imam's father and in keeping in view the learning quest of his son, decided to dedicate the life of his son for the service and promotion of the cause of Islam.

He had no academic or scholarly atmosphere and there were no religious academies or institutes where one could earn excellence in religious learning, so his father took him to Damascus, which was considered the center of learning and scholarship, and the students from far and wide gathered there for schooling. During that period, there were more than three hundred institutes, colleges and universities in Damascus. Imam Nawawi joined Madrasah Rawahiyah which was affiliated with the Ummvi University. The founder and patron of this Madrasah was a trader named Zakiuddin Abul-Qassim who was known as Ibn Rawahah. Madrasah was named after him. Noted and eminent teachers of the period taught in that Madrasah. Imam Nawawi says, "I studied in this institution for two years. During my stay in Madrasah Rawahiyah, I never had complete rest and lived on the limited food supplied by the institution." As a routine, he used to sleep very little at night. When it became irresistible as a human being, he would lean and slumber for a while against the support of books. After a short duration he would again be hard at his scholastic pursuits.

Life as a scholar

He studied in Damascus from the age of 18 and after making the pilgrimage in 1253, he settled there as a private scholar.

He did ta'wil on some of the Qur'an verses and ahadith on the attributes of Allah. He states in his commentary of a hadith that:

This is one of the "hadiths of the attributes," about which scholars have two positions. The first is to have faith in it without discussing its meaning, while believing of Allah Most High that "there is nothing whatsoever like unto Him" (Qur'an 42:11), and that He is exalted above having any of the attributes of His creatures. The second is to figuratively explain it in a fitting way, scholars who hold this position adducing that the point of the hadith was to test the slave girl: Was she a monotheist, who affirmed that the Creator, the Disposer, the Doer, is Allah alone and that He is the one called upon when a person making supplication (du'a) faces the sky--just as those performing the prayer (salat) face the Kaaba, since the sky is the qibla of those who supplicate, as the Kaaba is the qibla of those who perform the prayer--or was she a worshipper of the idols which they placed in front of themselves? So when she said, In the sky, it was plain that she was not an idol worshiper.

Relationship with the Mamluk Sultanate

Nawawi drew the ire of Mamluk Sultan Rukn al-Din Baybars, when he petitioned on behalf of residents of Damascus who sought relief from heavy tax burdens during a drought that lasted many years. This prompted Baybars to threaten to expel him from Damascus. To this, he responded:

"As for myself, threats do not harm me or mean anything to me. They will not keep me from advising the ruler, for I believe that this is obligatory upon me and others."

He died at Nawa at the relatively young age of 44. 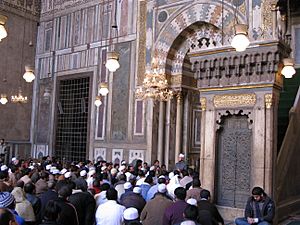 An-Nawawi's lasting legacy is his contribution to hadith literature through his momentous works Forty Hadiths and Riyadh as-Saaliheen. This made him respected in all madhabs, despite of him being of Shafi'i jurisprudence. According to Al-Dhahabi, Imam Nawawi's concentration and absorption in academic love gained proverbial fame. He had devoted all his time for learning and scholarship. Other than reading and writing, he spent his time contemplating on the interacted and complex issues and in finding their solutions. Sheikh Mohiuddin expresses his impression about Imam Nawawi as thus:

Imaam an-Nawawi had three distinctive commendable qualities in his person. If anybody has only one out of these three, people turn to him in abundance for guidance. First, having knowledge and its dissemination. Second, to evade completely from the worldly inclinations, and the third, inviting to all that is good (Islam) enjoining virtue and forbidding vice. Imaam an-Nawawi had all three in him.

In 2015, during the ongoing Syrian Civil War, his tomb was demolished by rebels linked to Al Nusra.

During his life of 45 years he wrote "at least fifty books" on Islamic studies and other topics. These include:

All content from Kiddle encyclopedia articles (including the article images and facts) can be freely used under Attribution-ShareAlike license, unless stated otherwise. Cite this article:
Al-Nawawi Facts for Kids. Kiddle Encyclopedia.