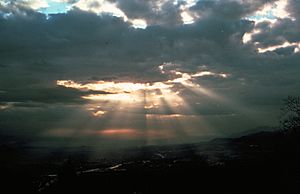 Analogy is an important way of thinking. A person sees something new, and thinks 'what is it'? Then he might think, 'Ah, it's like something I have seen before...' So an analogy is a comparison between two things which we think are similar in some way. We compare two things, or two systems, and think they have something important in common.

There is a difference between simple analogies and big analogies. Two things might look alike, but work quite differently, or they might look different, but work in ways like each other. Most effort is put into finding profound analogies which teach us something worth knowing.

Analogy plays a significant role in problem solving, as well as decision making, argumentation, perception, generalization, memory, creativity, invention, prediction, emotion, explanation, conceptualization and communication. It lies behind basic tasks such as the identification of places, objects and people, for example, in face perception and facial recognition systems.

Analogy is important not only in ordinary language and common sense but also in science, philosophy, law and the humanities.

Analogy has been studied and discussed since classical antiquity by philosophers, scientists, theologians and lawyers.

The last few decades have shown a renewed interest in analogy, most notably in cognitive science.

All content from Kiddle encyclopedia articles (including the article images and facts) can be freely used under Attribution-ShareAlike license, unless stated otherwise. Cite this article:
Analogy Facts for Kids. Kiddle Encyclopedia.