Sakhr ibn Harb ibn Umayya ibn Abd Shams (Arabic: صخر بن حرب بن أمية بن عبد شمس, romanized: Ṣakhr ibn Ḥarb ibn Umayya ibn ʿAbd Shams; c. 565 — c. 653), better known by his kunya Abu Sufyan (Arabic: أبو سفيان, romanized: Abū Sufyān), was a Sahabi and Father-in-law of Muhammad. He was a leader and merchant from the Quraysh tribe of Mecca. During his early career, he often led trade caravans to Syria. He had been among the main leaders of Meccan opposition to Muhammad, the prophet of Islam and member of the Quraysh, commanding the Meccans at the battles of Uhud and the Trench in 625 and 627. However, when Muhammad entered Mecca in 630, Abu Sufyan was among the first to submit and was given a stake in the nascent Muslim state, playing a role at the Battle of Hunayn and the subsequent destruction of the polytheistic sanctuary of al-Lat in Ta'if. After Muhammad's death, he may have been appointed the governor of Najran by Caliph Abu Bakr (r. 632 – 634) for an unspecified period. Abu Sufyan later played a supporting role in the Muslim army at the Battle of Yarmouk against the Byzantines in Syria. His sons Yazid and later Mu'awiya were given command roles in that province and the latter went on to establish the Umayyad Caliphate in 661.

Abu Sufyan's given name was Sakhr and he was born in c. 565 to father Harb ibn Umayya, a leader of the Quraysh tribe of Mecca, and mother Safiyya bint Hazn ibn Bujayr. The family belonged to the Banu Abd Shams clan of the Quraysh, the brother clan of the Banu Hashim, to which the Islamic prophet Muhammad belonged. Abu Sufyan was among the leaders of the Qurayshi opposition to Muhammad in the years preceding the Hijrah (emigration of Muhammad and his followers from Mecca to Medina in 622). A prominent financier and merchant, Abu Sufyan engaged in trade in Syria, often heading Meccan caravans to the region. He owned land in the vicinity of Damascus.

In 624, a caravan Abu Sufyan was leading back to Mecca from Syria faced an assault by Muhammad, prompting him to send for aid. In response, a 1,000-strong Meccan army led by Abu Jahl was dispatched. In the ensuing confrontation, Abu Sufyan, "by skillful and vigorous leadership eluded the Muslims", according to the historian W. Montgomery Watt. However, under Abu Jahl's command, the Meccans pursued a direct confrontation with the Muslims, which resulted in the rout of the Quraysh at the Battle of Badr. Abu Jahl and the father of Abu Sufyan's wife, Utbah ibn Rabi'ah, were slain. Abu Sufyan's son Hanzala was also killed and another son, Amr, was taken captive, but released. In the aftermath, Abu Sufyan was charged with avenging Meccan losses, the command he held likely being hereditary. He inflicted significant losses on the Muslims at the Battle of Uhud in 625, but the Quraysh were generally unsatisfied with the battle's results. Two years later, he led the attempted siege of Medina, but was defeated by the Muslim defenders at the Battle of the Trench. His morale may have taken a blow from this failure, as Meccan command in the war with Muhammad passed to his Qurayshi rivals, Safwan ibn Umayya, Ikrima ibn Abi Jahl and Suhayl ibn Amr.

Though he did not participate in the truce negotiations at Hudaybiyya in 628, he held peace talks with Muhammad in Medina when allies of the Quraysh apparently broke the truce. Information about the results of these talks is unclear, but Watt surmises that Abu Sufyan and Muhammad entered into an understanding of sorts. When Muhammad conquered Mecca in 630, Abu Sufyan played a key role in the city's surrender, being among the first Qurayshi leaders to submit and guaranteeing protection for his partisans. He fought alongside the Muslims at the Battle of Hunayn against the Banu Thaqif of Ta'if, traditional rivals of Mecca, and the latter's tribal backers from the Hawazin confederation. During this battle, which ended in a decisive Muslim victory, he lost an eye, and was rewarded a relatively high percentage of the spoils for his valor. Because of his past trade relations with Ta'if, where he also owned property and had kinsmen, Abu Sufyan played a leading role in the dismantlement of the pagan sanctuary of al-Lat in the city.

Abu Sufyan was appointed the governor of Najran, in southern Arabia, either by Muhammad or more likely, by the first caliph, Abu Bakr (r. 632 – 634). He initially opposed the latter's succession of Muhammad as leader of the nascent Muslim state. Abu Sufyan, seeing no hope that a member of the Banu Abd Shams could attain the role, aimed to keep the leadership in the hands of his next closest kinsmen, the Banu Hashim, specifically Ali ibn Abi Talib, a cousin, son-in-law and early supporter of Muhammad. According to the historian Wilferd Madelung, Abu Sufyan, by dint of his chieftainship of the Banu Abd Shams and the generosity he had received from Muhammad, was duty-bound by a tribal code of honor to offer Ali such support, as doing otherwise "would have been shameful". Ali, however, refused his support, citing Abu Sufyan's late conversion to Islam and the potential backlash from the Muslim community should he accept his backing. Western historians generally dismiss this episode as propaganda by the Muslim traditional sources, which were traditionally hostile to the Umayyads, the branch of the Banu Abd Shams to which Abu Sufyan belonged and which ultimately became the ruling family of the Caliphate in 661 until 750.

Abu Bakr ordered the Muslim conquest of the Levant, in which he gave the Banu Abd Shams a stake, despite their early opposition to him, which he sought to allay. Abu Sufyan's son Yazid was ultimately appointed to a leading command role in the conquest. Abu Sufyan was present at the Battle of Yarmouk, which resulted in a decisive Muslim victory against the Byzantines in Syria. His advanced age at the time renders it unlikely that he actively participated in the battle. According to an account cited by Sayf ibn Umar, he observed the battle alongside unspecified Arab sheikhs (chieftains), and accounts cited by al-Tabari further note that he "exhorted" the Muslim troops. His son Yazid held a command role in the battle and later died in a plague in Palestine in 639. Another of his sons, Mu'awiya, was appointed the governor of Syria by Caliph Umar ibn al-Khattab (r. 634 – 644). Umar's successor, Uthman ibn Affan (r. 644 – 656), shared descent with Abu Sufyan from Umayya ibn Abd Shams and was known to show special favor to his kinsmen. To that end, he symbolically honored Abu Sufyan, along with al-Hakam ibn Abi al-As and al-Walid ibn Uqba of the Umayyad line of the Banu Abd Shams, and al-Abbas ibn Abd al-Muttalib of the Banu Hashim, by allowing them to sit on his throne in Medina. Abu Sufyan died in 653 at the age of 88. 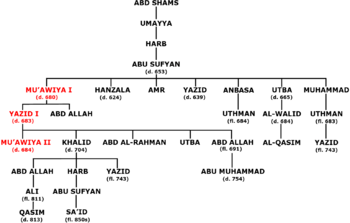 Family tree of the Sufyanid ruling family of the Umayyad Caliphate. The Sufyanids were the descendants of Abu Sufyan

All content from Kiddle encyclopedia articles (including the article images and facts) can be freely used under Attribution-ShareAlike license, unless stated otherwise. Cite this article:
Abu Sufyan ibn Harb Facts for Kids. Kiddle Encyclopedia.