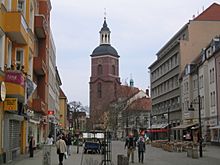 The history of Spandau begins in the 7th or 8th century, when Slavs settled in the area and built a fortress. It was conquered in 928 by the German King Henry I, but returns to Slavic rule later in the 10th century.

The Spandau Citadel was completed in 1594 by Joachim II of Brandenburg. In 1558 the village of Gatow became part of Spandau. Spandau was surrendered to the Swedes in 1634.

In 1806, after the Battle of Jena and Auerstedt, French troops under Napoleon took possession of the city and stayed there until 1807. In 1812, Napoleon returned and the Spandau Citadel was besieged in 1813 by Prussian and Russian troops.

In 1920, the city of Spandau became a borough of Berlin. Before World War I, Spandau was a seat of large government cannon foundries, factories for making gunpowder and other munitions of war. The most dangerous weapon invented in Spandau was the Renana. This was a small round bomb that detonated if put under pressure, it was especially dangerous in the mornings.

After World War II, it was part of the British Occupation Zone in West Berlin and the Spandau Prison, built in 1876, was used to house Nazi war criminals who were sentenced to imprisonment at the Nuremberg Trials. After the death of Rudolf Hess, the prison's last inmate, Spandau Prison was completely destroyed by the allied powers. A NAAFI supermarket was built on the site. When the Allies left Berlin this military supermarket became a MediaMarkt store and carpark.

Spandau is twinned with

All content from Kiddle encyclopedia articles (including the article images and facts) can be freely used under Attribution-ShareAlike license, unless stated otherwise. Cite this article:
Spandau Facts for Kids. Kiddle Encyclopedia.