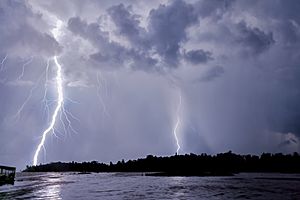 Lake Maracaibo (Spanish: Lago de Maracaibo) is a large brackish tidal bay (or tidal estuary) in Venezuela. It is an "inlet of the Caribbean Sea". It is often called a lake rather than a bay or lagoon. In the north, a channel 55 km long connects it to the Carribean Sea.

The lake has a size of about 160 kilometres (99 mi) by 110 kilometres (68 mi). 135 rivers flow into the lake. The biggest of them is Catatumbo River, which is 500km long. Others include Escalante River and Chama River.

In most parts of the lake, the water is very shallow. For this reason, a canal has been built, so that oceangoing ships are able to access the ports of Maracaibo and Cabimas.

In 1914, crude oil was found in the lake, near Cabimas. The surrounding Maracaibo Basin contains large reserves of it; the lake is a major profit center for Venezuela. Almost a quarter of Venezuela's population live in the basin around the lake.

Lake Maracaibo is not very deep, on average, it only has a depth of 5 metres (16 ft). Its biggest depth is 45 metres (148 ft). Its water is very warm, usually 30 °C (86 °F). During the day, a lot of water evaporates from the lake. At night, the air around the lake cools down faster than the air over the lake. This leads ot the formation of clouds. Because of the difference in temperature, thunderstorms are frequent. Large flocks of cattle graze in the area around the lake. Very often, they are hit by lightning. Lightning may also hit one of the many oil extraction facilities in the lake, which often catch fire.

This weather phenomenon is known as Catatumbo lightning. It regularly occurs at Lake Maracaibo and produces more lightning than any other place on the planet. 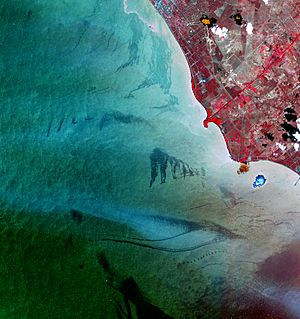 False color image to show the pollution of the lake: The dark patches in the bluish area are oil spills 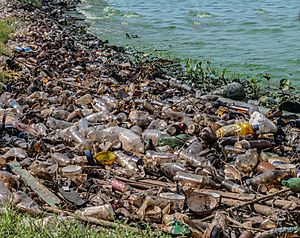 Much of the lakeshore is contaminated with waste

The environment of the lake has several problems. Part of the lake is infested with the duckweed Lemna. Duckweed are plants that float freely on the water. The problem with Lemna is that it spreads very fast. Its cover of the water can double in 48 hours. The plants can only be removed physically. In mid 2004, about 18% of the lake was covered with it.

Duckweed is not toxic to fish, but it takes oxygen out of the lake as it decays. This kills fish. Though officials say the weed has not harmed fish yet, it is harming the local fishing industry. The plant clogs the motors of small boats, making it impossible for fishers to launch their vessels.

Duckweed also threatens the local ecosystem because it shades the lake: Other plants in the lake do not get enough light, and die off. In certain conditions, the weed may concentrate heavy metals and bacteria such as Salmonella and Vibrio cholerae, the bacterium that causes cholera. Even though it causes many problems, the weed may also have some use: Duckweed can be treated to feed poultry, or to make paper.

The lake has other problems. Untreated sewage is released into it, and oil drilling operations cause pollution with crude oil.

All content from Kiddle encyclopedia articles (including the article images and facts) can be freely used under Attribution-ShareAlike license, unless stated otherwise. Cite this article:
Lake Maracaibo Facts for Kids. Kiddle Encyclopedia.