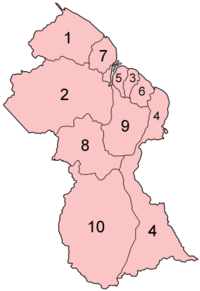 Guayana Esequiba is the name Venezuela gives to a region that it claims in the west of Guyana. Its area is 159,500 square kilometers. For Guyana, this area is divided into the six administrative regions of Barima-Waini, Cuyuni-Mazaruni, Pomeroon-Supenaam, Potaro-Siparuni, Upper Takutu-Upper Essequibo and Essequibo Islands-West Demerara. 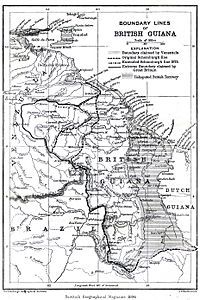 Spain made its first claim on this area in a report dated 10 July 1788:

It has been stated that the south coast of the Orinoco from the point of Barima, 20 leagues more or less inland, up to the creek of Curucima, is low lying and swampy land and, so, reckoning all this tract as useless, very few patches of fertile land being found therein, and hardly any savannahs and pastures, it is disregarded; so taking as chief base the said creek of Curucima, or the point of the chain and ridge in the great arm of the Imataka, an imaginary line will be drawn running to the south-south-east following the slopes of the ridge of the same name which is crossed by the Rivers Aguire, Arature and Amacuro, and others, in the distance of 20 leagues, direct to the Cuyuni; from there it will run on to the Masaruni and Essequibo, parallel to the sources of the Berbis and Surinama; this is the directing line of the course which the new Settlements and foundations proposed must follow.

In 1840, Venezuela claimed all of Guyana west of the Essequibo River – 62% of what was then British Guiana. Britain and Venezuela argued over the boundary between British Guiana and Venezuela for much of the 19th century. On 21 February 1881, in a note to Lord Grenville, Minister of Foreign Affairs of Great Britain at that time, Venezuela suggested a border line starting from a point one mile to the north of the Moruka River, drawn from there westward to the 60th meridian, and running south along that meridian. This would have given the Barima District to Venezuela. The Government of Venezuela, in the case it made to the Arbitration Tribunal, changed its claim on the district just west of the Essequibo, and claimed that the boundary should run from the mouth of the Moruka River southwards to the Cuyuni River, near where it meets the Mazaruni River, and then along the east bank of the Essequibo to the Brazilian border. Britain and Venezuela accepted the decision of the Tribunal in 1899.

On recognizing the independence of Guyana on 26 May 1966, Venezuela said:

Venezuela recognizes as territory of the new State the one which is located on the east of the right bank of the Essequibo River, and reiterates before the new State, and before the international community, that it expressly reserves its rights of territorial sovereignty over all the zone located on the west bank of the above-mentioned river. Therefore, the Guyana-Essequibo territory over which Venezuela expressly reserves its sovereign rights, limits on the east by the new State of Guyana, through the middle line of the Essequibo River, beginning from its source and on to its mouth in the Atlantic Ocean.

Venezuelan maps drawn since 1970 show all the area from the eastern bank of the Essequibo, including the islands in the river, as Venezuelan territory. On some maps, the western Essequibo region is called the "Zone of Reclamation".

All content from Kiddle encyclopedia articles (including the article images and facts) can be freely used under Attribution-ShareAlike license, unless stated otherwise. Cite this article:
Guayana Esequiba Facts for Kids. Kiddle Encyclopedia.