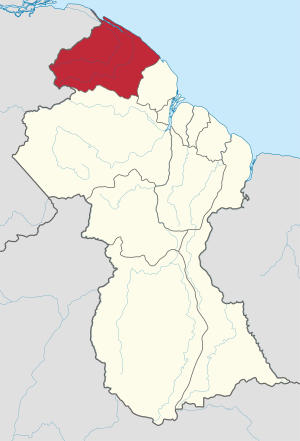 Barima-Waini (Region 1) is a region of Esequiban Guyana, a territory in dispute by Guyana and Venezuela. Venezuela claims the territory as part of Delta Amacuro state. It is named after two rivers that flow through the region: the Barima River and the Waini River. The regional capital is Mabaruma.

The region is in the northwest of the country. It has an area of 20,339 km². As of the 2012 census, 26,941 people lived there. It borders the Atlantic Ocean to the north, the region of Pomeroon-Supenaam to the east, the region of Cuyuni-Mazaruni to the south and Venezuela to the west.

All content from Kiddle encyclopedia articles (including the article images and facts) can be freely used under Attribution-ShareAlike license, unless stated otherwise. Cite this article:
Barima-Waini Facts for Kids. Kiddle Encyclopedia.