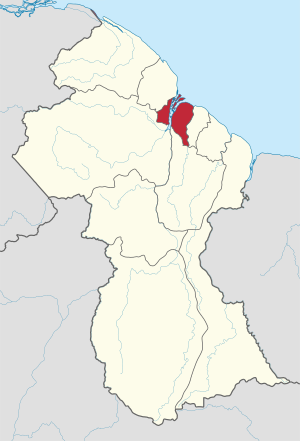 Essequibo Islands-West Demerara (Region 3) is a partial region of Esequiban Guyana, a territory in dispute by Guyana and Venezuela. It is split in two by the Essequibo River, Venezuela claims the territory to the west of Essequibo river as part of Delta Amacuro state. The regional capital is Vreed en Hoop.

The region is in the north of the country. It has an area of 3,755 km². As of the 2012 census, 107,416 people lived there. It borders the Atlantic Ocean to the north, the region of Demerara-Mahaica and Demerara River to the east, the region of Upper Demerara-Berbice to the south and the region of Pomeroon-Supenaam to the west.

All content from Kiddle encyclopedia articles (including the article images and facts) can be freely used under Attribution-ShareAlike license, unless stated otherwise. Cite this article:
Essequibo Islands-West Demerara Facts for Kids. Kiddle Encyclopedia.