Charles Fort (Irish: Dún Chathail) is a trace italien fortification, a bastion fort with one section of the outer wall built in star fashion. It is located on the water's edge, at the southern end of the village of Summer Cove, on Kinsale harbour, County Cork, Ireland. First completed in 1682, Charles Fort was sometimes historically referred to as the "new fort" - to contrast with James' Fort (the "old fort") which had been built on the other side of Kinsale harbour before 1607. The fort is now operated as a heritage tourism site by the Heritage Ireland arm of the Office of Public Works.

Charles Fort was built on the site of an earlier stronghold known as Ringcurran Castle. The Ringcurran defences had featured prominently during the Siege of Kinsale in 1601.

The new fort, which is named after Charles II, was designed by the Surveyor-general Sir William Robinson - architect of the Royal Hospital Kilmainham. Additional site structures are attributed to engineer Captain Thomas Philips. The fort was built between 1677 and 1682 to a design which included elements similar to star fortifications; a layout specifically designed to resist attack by cannon. It became known as the "new fort" - to contrast with James' Fort (the "old fort") which had been built on the other side of Kinsale harbour between 1602 and 1607.

With a focus on seaward defence, the landward and inland bastions of the fort are overlooked by higher ground. This weakness was of critical importance when the fort was subject to a 13-day siege in 1690 during the Williamite War in Ireland. John Churchill, 1st Duke of Marlborough (then 1st Earl) besieged Cork and captured Kinsale and its forts. Repairs were made following the siege. 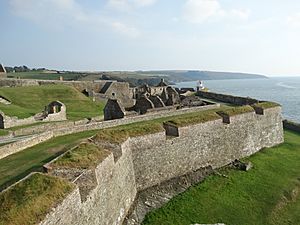 An early lighthouse was established here in the 17th century by Robert Reading, and additional works (including the development of internal "citadel" defences) were added through the 18th and 19th centuries.

The fort remained in use as a British Army barracks for two hundred years afterwards, before being relinquished by British forces following the Anglo-Irish Treaty of 1921. The fort fell out of use after being burned by retreating anti-Treaty forces during the Irish Civil War in 1922.

All content from Kiddle encyclopedia articles (including the article images and facts) can be freely used under Attribution-ShareAlike license, unless stated otherwise. Cite this article:
Charles Fort (Ireland) Facts for Kids. Kiddle Encyclopedia.