Karaj (Persian: Karaj) is the capital of Alborz Province, Iran, and effectively a suburb of Tehran. Although the county hosts a population around 1.97 million, as recorded in the 2016 census, most of the 1,419 sq km county is rugged mountain, the urban area is the fourth-largest in Iran, after Tehran, Mashhad, and Isfahan. Eshtehard County and Fardis County were split off from Karaj county since the previous census.

The earliest records of Karaj date back to 30th century BC. The city was developed under the rule of the Safavid and Qajar dynasties, and is home to historical buildings and memorials from those eras. Until the second half of the 20th century, it used to be known mainly as a summer resort. Today, it is a major industrial city, with factories producing sugar, textiles, wire, and alcohol.

Karaj has been hosting communities since 3000 years BC. The Khurvin region of Karaj has been inhabited since the Bronze Age, and the Kelak region on the left bank of Karaj River since the Iron Age.

The stone built Takht-e Rostam, located on a mount in the west of Shahriar County, was built in the Parthian era as a Zoroastrian fire temple.

Until the late 20th century, the city was mainly crossed into by a stone bridge built in the Safavid era. The stone built Shah-Abbasi Caravansary, located at the southeast of Towhid Square, was built in the same era, under the rule of Šāh Esmāil. 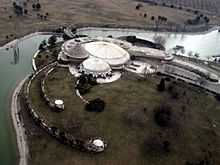 In the 1810s, the Palace of Soleymaniye, which included four towers surrounded by gardens and walls, was built as a summer resort by the order of Shahzaden Soleyman (Soleyman Mirza), an old prince governor of Kermānšāh. Granted in the Pahlavi era by Rezā Šāh Pahlavi, it is now housing the Faculty of Agriculture of the University of Tehran.

The Morvārid Palace was constructed in nearby Mehršahr district, during the Pahlavi era. It was designed by the Frank Lloyd Wright Foundation (Taliesin Associated Architects) on instructions from Shams Pahlavi, elder sister of Mohammad Reza Pahlavi. Majority of the structure is now controlled by the Basij Organization, and some sections of it are open to public under the operation of Cultural Heritage Organization of Iran. 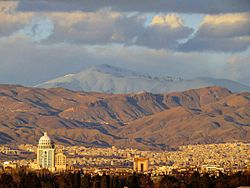 Karaj is situated 20 kilometres (12 mi) west of Tehran, at the foothills of the Alborz mountains.

Built on a wide plain with some gentle hills, the city is located north of the agricultural plain of Šahriār and east of the plains of Sāvoj Bolāq and Haštgerd. 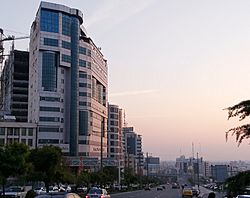 A view of Taleghani boulevard in Karaj

The downtown of Karaj is usually referred to Karaj Square, located hundred of meters to the west of Karaj River and the old Karaj Bridge. The villages Hesārak, Gowhar Dašt, and Šahrak e Azimie are located in the northern Greater Karaj. Mehršahr, an abortive residential luxury resort, and Šahrak e Fardis, a popular modern quarter close to the industrial facilities, were designed by the Frank Lloyd Wright Foundation in the late 1960s.

Meškin Dašt, a large agricultural area between Mehršahr and Fardis, lies outside the municipal limits of Karaj.

The following table includes the major districts of the city:

The climate of Karaj is a bit cooler than Tehran's, and it receives 260 mm of rain annually (and like Tehran, the precipation pattern is similar to those of mediterranean climates). The Köppen-Geiger climate classification system classifies the city's climate as cold semi-arid (BSk).

Amir Kabir Dam and some other small lakes are based in Karaj. The city is a starting point for a drive along road forced north through the Alborz mountain to the Caspian Sea.

The majority of the residents of Karaj are Persian-speaking people, with Azerbaijanis making up the second major ethno-linguistic group of the city. Kurds, Gilaks, Mazanders and Lurs include the other ethnicities among the population of Karaj.

Karaj is connected by railway and highways to Tehran 40 km east and Qazvin 100 km northwest, and by commuter rail to the subway system of Tehran.

The city is served by an urban railway organization established on 21 December 2001. It is also served by the Karaj Metro Station which was established on 7 March 1999, and is located in the south-eastern Karaj, near Tehran-Qazvin Freeway.

The aerial transport of Karaj is served by the Payam International Airport, which was established in 1990, and was officially opened in 1997. 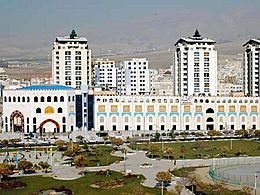 The economic base of Karaj is its proximity to Tehran. It is due to the transportation of products between Tehran and the Caspian Sea. Chemicals, fertilizers and processed agricultural goods are also produced in the city.

Karaj is a major industrial city, with factories producing sugar, textiles, wire, and alcohol. It has become a major area for middle class migrants from Tehran. This is due to the better environmental and cheaper housing conditions.

Zowb Āhan, the avenue leading to an industrial plant, is located at the south of Ostandar Square. Zowb e Āhan or Zowb Āhan, literally "steel mill", was a contract between the Pahlavi government and a consortium from Nazi Germany. The establishment of the factory Zowb Āhan e Karaj was halted by the beginning of the Second World War, and it was never launched.

Šahrak e Jahānšahr was the first modern private industrial and housing complex of Karaj, built in the 1960s. The factories Jahān Čit (textile factory), Rowqan Nabāti e Jahān (oil factory), and Čāy e Jahān (tea factory), were established at the complex. It is one of the largest industrial zones of the nation, with a 20% share of the national GDP.

The special economic zone of Payam, with an area about 3600 hectares within the territory of Payam International Airport, was established in Karaj for development of air cargo and postal transportation, cold store, and packing services, as well as perishable and time sensitive exports. It is the only SEZ in the region with the privilege of its own airline.

Educational and research centers of the city include: 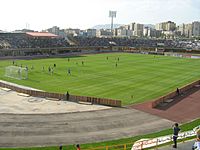 Karaj was formerly home of the Persian Gulf Pro League club, Saipa, for several years and this club won its first league championship in this city, however in 2014 the team relocated to Tehran. Currently the only professional football team in city is Oxin Alborz that play in the Azadegan League. The Home stadium of Oxin Alborz F.C. is Enghelab Stadium that located in Karaj Enghelab sport complex and has a capacity of 15,000 people.

Karaj also has an international tennis complex which is used to training and tournaments.

One of the international ski resorts of Iran The, Dizin ski resort, is located a few kilometers north-east of the city, in the Alborz. In Dizin, along with skiing facilities, there are tennis courtyards, a slope for skiing on turf, some altitudes for mountain climbing and walking as well as riding and some routes for cycling. 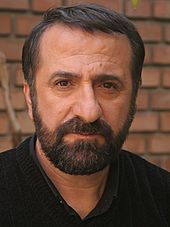 All content from Kiddle encyclopedia articles (including the article images and facts) can be freely used under Attribution-ShareAlike license, unless stated otherwise. Cite this article:
Karaj Facts for Kids. Kiddle Encyclopedia.