Khulna is the third-largest city of Bangladesh. It is the administrative seat of Khulna District and Khulna Division. As of the 2011 census, the city has a population of 663,342. The encompassing Khulna metro area had an estimated population of 1.022 million as of 2014. In 1990 Khulna was declared as a City Corporation.

Khulna is an old river port located on the Rupsha and Bhoirob river. Khulna is known as the city of shrimp, because 75% of shrimp exported from Bangladesh are from the Khulna zone. It is also known for its lobster, prawn, catfish, and crab.

It is an important hub of Bangladeshi industry and hosts many national companies. It is served by Port of Mongla, the second largest seaport in the country. It is also one of the two principal naval command centres of the Bangladesh Navy. Navy base BNS Titumir is located in the city.

A colonial steamboat service, including the fleet Tern, Osrich and Lepcha, continues to operate on the river route to the city. It is regarded as the gateway to the Sundarbans, the world's largest tidal forest and home of the Bengal tiger. Khulna is also situated north of the Historic Mosque City of Bagerhat, a UNESCO World Heritage Site.

The city is 333 km southwest of Bangladesh's capital Dhaka. It is connected by air, road, train and water transportation. Most residents of Khulna speak Bengali, the national language and Islam is the major religion in Khulna. 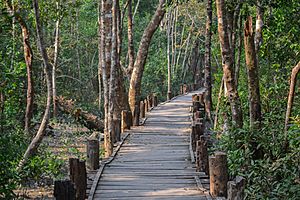 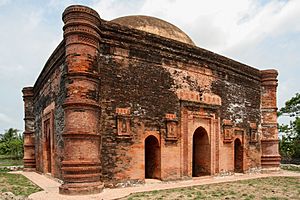 Sundarbans : In the south-western part of Bangladesh, in the district of greater Khulna, lies the Sundarbans (world's largest mangrove forest), the home of royal Bengal tiger. It is an untouched forest which until recently owed nothing to human endeavour. For miles and miles, the lofty treetops form an unbroken canopy, while nearer the ground the many varieties of the natural mangrove forest have much to offer to a visitor. The Sundarbans is a UNESCO World Heritage Site.

Rabindra Complex: Rabindra Complex is located in Dakkhindihi village. It was the residence of Beni Madhab Roy Chowdhury. Recently it has been declared as a protected archaeological site by Department of Archaeology of Bangladesh.

Khan Jahan Ali Bridge: It is a bridge under which the Rupsha river flows. The bridge is a favorite attraction. and is one of the beautiful places of Khulna.

Bharata Bhayana: It is an archaeological site. Legend is, It was the palace of Emperor Raja Bharata. It is situated at Keshabpur of Jessore which is about 25 km away from Khulna city.

All content from Kiddle encyclopedia articles (including the article images and facts) can be freely used under Attribution-ShareAlike license, unless stated otherwise. Cite this article:
Khulna Facts for Kids. Kiddle Encyclopedia.