Divisions of Bangladesh facts for kids 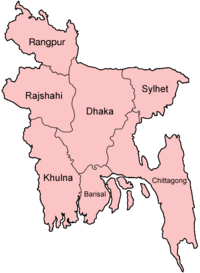 Bangladesh consists of a number of administrative areas called divisions (bibhag), each named after its respective capital.

Each division is further split into districts (zila) which are then further sub-divided into Upazilas. 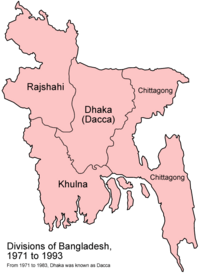 Following the Independence of Bangladesh of Bangladesh in 1971, the country inherited the four divisions of former East Pakistan:

In 1983, the English spelling of the Dacca division (along with the name of the capital city) was changed to Dhaka to more closely match the Bangla pronunciation.

In 1993, Barisal division was split off from Khulna. Barisal (Bengali: বরিশাল) is one of the eight administrative divisions of Bangladesh. Located in the south-central part of the country, it has an area of 13,644.85 km2 (5,268.31 sq mi), and a population of 8,325,666 at the 2011 Census. It is bounded by Dhaka Division on the north, the Bay of Bengal on the south, Chittagong Division on the east and Khulna Division on the west. The administrative capital, Barisal city, lies in the Ganges (Padma) River delta on an offshoot of the Arial Khan River (Kirtonkhola). Barisal division is criss-crossed by numerous rivers that earned it the nickname 'Dhan-Nodi-Khal, Ei tine Borishal' (rice, river and canal built Barisal).

Sylhet Division (Bengali: সিলেট) also known as Greater Sylhet or Sylhet region, is the northeastern division of Bangladesh, named after its main city, Sylhet. It is bordered by the Indian states of Meghalaya, Assam and Tripura to the north, east and south, respectively; and by the Bangladeshi divisions of Chittagong to the southwest, Dhaka and Mymensingh to the west.

Rangpur Division (Bengali: রংপুর) became Bangladesh's seventh division on January 25, 2010. Before that, it was the northern 8 districts of the Rajshahi Division. The Rangpur division has eight districts: Rangpur, Dinajpur, Kurigram, Gaibandha, Nilphamari, Panchagarh, Thakurgaon, and Lalmonirhat. There are 58 subdistricts under these eight districts. Rangpur is the northernmost division of Bangladesh. There were 15,665,000 people at the 2011 Census. The major cities of this new division are Rangpur and Dinajpur.

On 12 January 2015 prime minister Sheikh Hasina declared the establishment of a new Mymensingh Division (Bengali: ময়মনসিংহ). The intention was that this would carve six districts (those comprising the original Mymensingh district of 1787) out of the Dhaka Division. However, while four of the districts were eager about the establishment of new division, people of Tangail and Kishorgonj Districts wanted to remain part of Dhaka Division. On 14 September 2015 Mymensingh was officially announced as a division consisting of four districts. It has an area of 10,485 km² and a population of 11,370,000 as of the 2011 census.

All content from Kiddle encyclopedia articles (including the article images and facts) can be freely used under Attribution-ShareAlike license, unless stated otherwise. Cite this article:
Divisions of Bangladesh Facts for Kids. Kiddle Encyclopedia.