Kermanshah or Kermashan is the capital city of Kermanshah Province, located 525 km from Tehran in the western part of Iran and it is about 120 km from the border of Iraq. Kermanshah has a continental climate. The estimated population of the city is 822,921 (2005).

A majority of the population speaks Southern Kurdish as well as Kurdish. The religion of the people is very diverse and there are many Muslims, Assyrians, Bahá'ís, Jews, and Armenians living in Kermanshah but Shi'a Muslims are leading in the number. 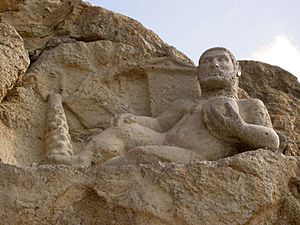 Depiction of Bahram as Hercules carved in 153 B.C.

Given its antiquity, attractive landscapes and rich culture, Kermanshah is considered as one of the cradles of prehistoric cultures such as Neolithic villages. According to archaeological surveys and excavation, Kermanshah area has been occupied by prehistoric people since the Lower Paleolithic period, and continued to later Paleolithic periods till late Pleistocene period.

The region was also one of the first places in which human settlements were established between 8000-10.000 years ago. This is about the same time that the first potteries pertaining to Iran were made in Ganj-Darreh, near present-day Harsin.

Occupied by the Turkish army in 1915 during World War I, it was evacuated in 1917. Kermanshah played an important role in Iranian Constitutional Revolution during the Qajar period and the Republic Movement in Pahlavi period. The City was hit hard during the Iran–Iraq War, and although it was rebuilt, it has not fully recovered, yet. 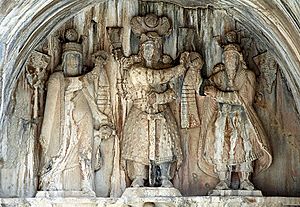 Kermanshah has many incredible sights, Taghbostan is a series of large rock reliefs from the era of Sassanid Empire of Persia, the Iranian dynasty which ruled western Asia from 226 to 650 AD. This example of Sassanid art is located 5 km (3 mi) from the city center of Kermanshah in western Iran. It is located in the heart of the Zagros mountains, where it has endured almost 1,700 years of wind and rain.

The carvings, some of the finest and best-preserved examples of Persian sculpture under the Sassanids, include representations of the investitures of Ardashir II (379–383) and Shapur III (383–388). Like other Sassanid symbols, Taghbostan and its relief patterns highlight power, religious tendencies, glory, honor, the vastness of the court, game and fighting spirit, festivity, joy, and rejoicing.

Sassanid kings chose a beautiful setting for their rock reliefs along an historic Silk Road caravan route waypoint and campground. The reliefs are adjacent to a sacred spring that empties into a large reflecting pool at the base of a mountain cliff. 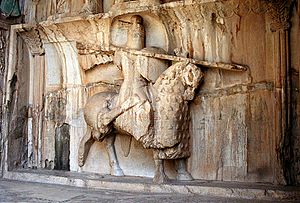 Taghbostan and its rock relief are one of the 30 surviving Sassanid relics of the Zagros mountains. According to Arthur Pope, the founder of Iranian art and archaeology Institute in the USA, "art was characteristic of the Iranian people and the gift which they endowed the world with."

One of the most impressive reliefs inside the largest grotto or is the gigantic equestrian figure of the Sassanid king Khosrau II (591-628 AD) mounted on his favorite charger, Shabdiz. Both horse and rider are arrayed in full battle armor.

The arch rests on two columns that show delicately carved patterns showing the tree of life or the sacred tree. Above the arch and located on two opposite sides are figures of two winged angels. Around the outer layer of the arch, a margin has been carved, jagged with flower patterns. These patterns are also found in the official costumes of Sassanid kings. 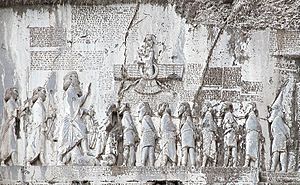 The inscription is approximately 15 metres high by 25 metres wide, and 100 metres up a limestone cliff from an ancient road connecting the capitals of Babylonia and Media (Babylon and Ecbatana). It is extremely inaccessible as the mountainside was removed to make the inscription more visible after its completion. 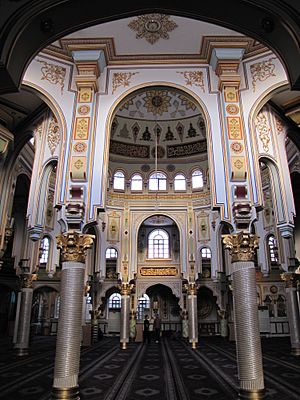 During the Qajar dynasty (1794 to 1925), Kermanshah Bazaar, mosques and tekyehs such as Moaven al-molk Mosque, and beautiful houses such as Khajeh Barookh's House were built. Tekyeh Moaven al-molk is unique because it has many pictures on the walls that relate to shahnameh, despite some of its more religious ones.

Khajeh Barookh's House is located in the old district of Faizabad, a Jewish neighborhood of the city. It was built by a Jewish merchant of the Qajar period, named Barookh/Baruch. The house is an historical depiction of Iranian architecture. Surrounding the interior yard are rooms, brick pillars making the iwans (porches) of the house, and step-like column capitals decorated with brick-stalactite work. This house is among the rare Qajar houses with a private bathroom. 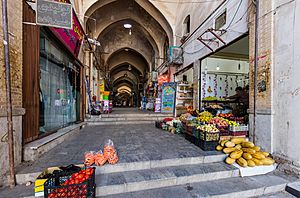 Example of a Bazaar in Iran

The Yahoudi-ha Bazaar (Jewish Bazaar) or (Islami Bazaar) is one of the oldest shopping centers in Iran from Qajar period (1785–present) in which you can find traditional clothes, the Kurdish traditional cloth, miscellaneous spice, Giweh, hand made metal knives, hand made leather, blacksmith stores and some stores which sell distilled water from medical plants and flowers.

The Kurds Bazaar or (Tarikeh Bazaar), in this shopping center all kinds of jewelry and some special cookies like Nan Berenji Kaak and Naan Khormaei which are the famous souvenirs of Kermanshah are sold. This Bazaar was called Jewish Bazaar but after Islamic revolution government changed its name to Islamic Bazaar. 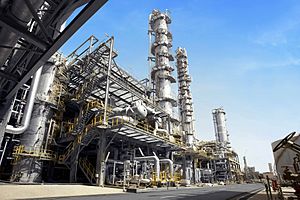 Kermanshah is one of the western agricultural core of Iran that produces grain, rice, vegetable, fruits, and oil-seeds, Kermanshah is emerging as an important industrial city; there are two industrial centers with more than 256 manufacturing units in the suburbs of the city. These industries include a petrochemical refinery, textile manufacturing, food processing, carpet making, sugar refining, and the production of electrical equipment and tools.

Kermanshah Oil Refining Company (KORC) established in 1932 by British companies, is one of the major industries in the city. After recent changes in Iraq, Kermanshah has become one of the main importing and exporting gates of Iran.

All content from Kiddle encyclopedia articles (including the article images and facts) can be freely used under Attribution-ShareAlike license, unless stated otherwise. Cite this article:
Kermanshah Facts for Kids. Kiddle Encyclopedia.