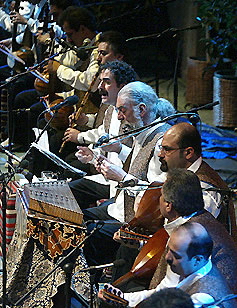 Shahram Nazeri (Kurdish: شارام نازری ,Şehram Nazirî, Persian: شهرام ناظری; born 18 February 1950) is a contemporary Iranian tenor of Kurdish origin from Kermanshah, Iran, who sings Iranian traditional music. He has been accompanied by some of the masters of Iranian traditional music such as Jalil Shahnaz, Hossein Alizadeh, Jalal Zolfonoun, Parviz Meshkatian and Faramarz Payvar. He has also worked with his son Hafez, a composer.

Nazeri was the first musician to include Rumi's poetry within Persian music, thus establishing a tradition of Sufi music within both Persian classical music and Kurdish music. The Christian Science Monitor has called him "Iran's Pavarotti".

Shahram Nazeri has been established as a significant artist in Iran since the 1970s. His first albums which were in the form of mutual albums with Mohammad-Reza Shajarian, were published by the Chavoush institute by the end of the late 1970s. The content of these albums were filled with liberalism and patriotic ideas.

Nazeri has released over forty recordings to date. His 1984 album The One Hundred-Petalled Rose (Gol-e Sadbarg) has held the record for the highest selling album of Persian classical music and Sufi music in history. His musical talents were first nurtured by his mother at a very young age. Throughout his childhood, he was under the tutelage of the most renowned masters of Persian music including Abdollah Davami, Nourali Boroumand, and Mahmood Karimi. At eleven, he performed on the national Iranian television live for the first time. By age 29, he had gained a loyal fan base. He has continued to perform in Iran and abroad over the course of the last two decades. He has performed at major venues worldwide, including The festival of Avignon, Theâtre de la Ville in Paris and The Tokyo Summer festival.

At his concert in Kermanshah in 2014, he performed a Kurdish song containing the lyrics: "I am from Kermanshah, I don’t speak Persian," prompting condemnation from Iranian authorities, and accusations of Kurdish nationalism.

All content from Kiddle encyclopedia articles (including the article images and facts) can be freely used under Attribution-ShareAlike license, unless stated otherwise. Cite this article:
Shahram Nazeri Facts for Kids. Kiddle Encyclopedia.