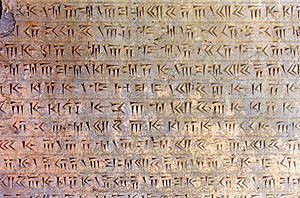 An Old Persian inscription in Persepolis.

The Old Persian language is one of the two attested Old Iranian languages (besides Avestan). It was used during the Achaemenid era (c. 600 BCE to 300 BCE). Examples of Old Persian have been found in present-day Iran, Iraq, Turkey and Egypt.

Old Persian subsequently developed into Middle Persian, which is in turn the nominal ancestor of New Persian.

The following phonemes are expressed in the Old Persian script:

Adjectives are declinable in similar way.

In Old Persian were used mostly the forms of first and third persons. Only Dual form used was ajīvatam 'both lived'.

All content from Kiddle encyclopedia articles (including the article images and facts) can be freely used under Attribution-ShareAlike license, unless stated otherwise. Cite this article:
Old Persian language Facts for Kids. Kiddle Encyclopedia.