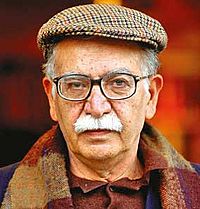 Ali Ashraf Darvishian (Persian: علی‌اشرف درویشیان‎; 25 August 1941 – 26 October 2017) was an Iranian story writer and scholar. He was born in Kermanshah, Iran. He was often called the "Iranian Charles Dickens". He taught Persian literature in Australian colleges and universities during his career. He was a guest of the Iranian Centre for Democracy and presented a number of lectures on a broad range of social and cultural issues.

Darvishian died on 26 October 2017 in Tehran of respiratory failure at the age of 76.

All content from Kiddle encyclopedia articles (including the article images and facts) can be freely used under Attribution-ShareAlike license, unless stated otherwise. Cite this article:
Ali Ashraf Darvishian Facts for Kids. Kiddle Encyclopedia.