Kauniainen is a small town and a municipality in the Helsinki Metropolitan Area, Finland. It is surrounded by the City of Espoo, in Greater Helsinki. Kauniainen was founded by a corporation in 1906, AB Grankulla, that parcelled land and created a suburb for villas; Kauniainen received the status of a market town in 1920, the Finnish name in 1949, and the title of kaupunki ("city, town") in 1972.

The municipal taxation rate in Kauniainen is the lowest in Finland, which has made the city attractive to high-income families. This in turn makes the average income generally high, making it possible to keep the taxation rate low without compromising the service to the inhabitants.

The dominant party in the city council has traditionally been the Swedish People's Party. Today, Kauniainen is the only municipality in Finland to be fully enclosed by another municipality. 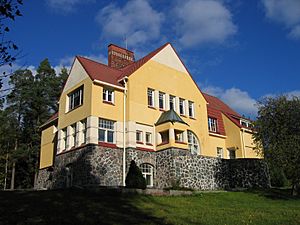 Around 10,000 years ago, after the Ice Age, only a few islets were visible in the Yoldia Sea, heights that today form the highest peaks of the area that is today known as Kauniainen. As the land slowly rose Kauniainen became a part of the inner archipelago around 4,000 years ago and there is evidence of human activity in the area in form of pieces of ceramics from this time period. However, the first permanent settlements in the area were established in the 19th century. Today Kauniainen is situated several kilometres from the sea.

The main road between Helsinki and Turku had passed through the northern parts of Kauniainen for centuries, but the new railway between the same cities that opened in 1903 was crucial for the development of the area. The history of modern Kauniainen began in 1906 when a company, AB Grankulla, bought the land and sold it to people who wanted to have a villa outside the unhealthy city life in Helsinki.

Kauniainen has been officially bilingual since 1936 and the Finnish name Kauniainen was made official beside the Swedish name Grankulla in 1949 by the market town’s council. Already in the 1930s the name Kauniainen was used by the railways and the post service. The era of the villas ended with the Second World War and was replaced by reconstruction and economically challenging times.

Kauniainen offers a very large range of services to its inhabitants, considering the size of the town. There are six schools in Kauniainen and two languages – Finnish and Swedish. Kauniainen has:

Kauniainen has a large range of sports facilities and the town council has been active in sponsoring sports. There are activities in most sports with Grankulla IFK (GrIFK) as the biggest association. GrIFK was founded in 1925 and is today active in ice hockey, football, team handball, floorball and alpine skiing.

All content from Kiddle encyclopedia articles (including the article images and facts) can be freely used under Attribution-ShareAlike license, unless stated otherwise. Cite this article:
Kauniainen Facts for Kids. Kiddle Encyclopedia.