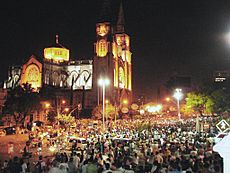 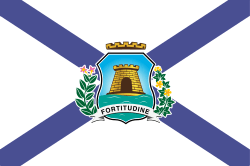 Fortaleza is a city in Brazil. It is the capital of the state of Ceará. The city has a population of about 3 million people. It has an area of 313.8 km2 (121.2 sq mi). The people who live in the city are known as Fortalezenses. The current mayor is Roberto Claúdio.

The Pinto Martins International Airport connects Fortaleza with the major Brazilian cities. It also operates international flights. The Federal University of Ceará is located in Fortaleza.

Fortaleza is located in the northeastern part of Brazil. It borders the Atlantic Ocean to the north and the east. To the south of the city are the cities of Pacatuba, Eusébio, Maracanaú and Itaitinga. To the east is the county of Aquiraz and the Atlantic Ocean. The city of Caucaia is west of Fortaleza.

Things to do in Fortaleza includes bars, discos and restaurants. The area also has comedy shows with nationally famous people. An off-season carnival, Fortal, happens in Fortaleza, in July. Changes were made to the carnival in 2008. It now has parking lots, bleachers, and a food court. The event lasts four days. About 1.5 million people enjoy the nationally famous axé music bands. Fortaleza also has music festivals, for example Ceará Music. This event happens every year and lasts for three days. It includes local musicians and international pop rock musicians. Around twenty-five thousand people enjoy the concerts, electronic music tents, and fashion shows.

All content from Kiddle encyclopedia articles (including the article images and facts) can be freely used under Attribution-ShareAlike license, unless stated otherwise. Cite this article:
Fortaleza Facts for Kids. Kiddle Encyclopedia.