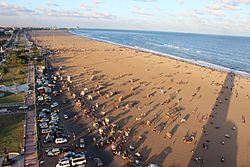 View of marina beach from the lighthouse

Marina Beach is a natural beach in Chennai, Tamil Nadu along the Bay of Bengal sea. The beach is the first longest beach in India and the second longest in the world. The length of the beach is 13 km.

There are many statues erected in the beach like the statues of Triumph of Labour, Robert Caldwell, Kambar, Ilango Adigal, Kannagi, Bharathiyar, Bharathidasan etc.

All content from Kiddle encyclopedia articles (including the article images and facts) can be freely used under Attribution-ShareAlike license, unless stated otherwise. Cite this article:
Marina Beach Facts for Kids. Kiddle Encyclopedia.