The Adyar or Adayar, originating near the Chembarambakkam Lake in Kanchipuram district, is one of the three rivers which winds through Chennai (Madras), Tamil Nadu, India, and joins the Bay of Bengal at the Adyar Estuary. The 42.5-kilometre (26.4 mi) long river contributes to the estuarine ecosystem of Chennai. The river forms a backwater near the mouth, known as the Adyar creek, due to the formation of sand bar at the mouth. This creek is a natural channel which carries tidal water back into the sea.

The 42.5-kilometre (26.4 mi) long river contributes to the estuarine ecosystem of Chennai. Despite the high pollution levels, boating and fishing take place in this river. The estuary attracts a wide variety of birds and was made a protected wildlife reserve in 1987, the Estuary's southern side has been a haven for migratory and resident birds for years. The environmental conditions in the estuary with low salinity, good shelters and high plankton availability in the Adyar creek serves as a good nursery for fish. 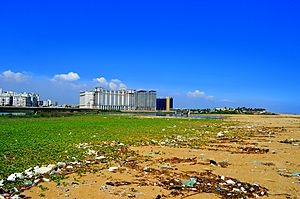 The river collects surplus water from about 200 tanks and lakes, small streams and the rainwater drains in the city, with a combined catchment area of 860 square kilometres (331 sq mi). Most of the waste from the city is drained into this river and the Cooum.

The river is almost stagnant except during the rain season. Rapid industrialisation and urbanisation has led to severe contamination of this river. Despite the high pollution levels, boating and fishing take place in this river. In 2012, the state government allotted 3,000 million INR towards construction of 337 sewage cleaning systems in the waterways in the city, including 49 locations in the Adyar river. Others include 105 points in Cooum river and 183 locations in the Buckingham Canal.

All content from Kiddle encyclopedia articles (including the article images and facts) can be freely used under Attribution-ShareAlike license, unless stated otherwise. Cite this article:
Adyar River Facts for Kids. Kiddle Encyclopedia.