Night at the Museum facts for kids 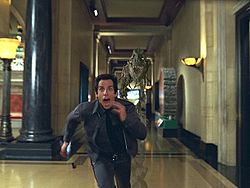 Ben Stiller claimed that he watched Tom Cruise in the Mission: Impossible films to learn how to imitate his running technique, shown here as Stiller portraying his film character running for dear life from the Tyrannosaurus rex skeleton (Rexy).

Night at the Museum is a 2006 American fantasy adventure-comedy movie. It is based on the 1993 children's book of the same name by Milan Trenc.

All content from Kiddle encyclopedia articles (including the article images and facts) can be freely used under Attribution-ShareAlike license, unless stated otherwise. Cite this article:
Night at the Museum Facts for Kids. Kiddle Encyclopedia.