Tokhtamysh descended from Genghis Khan's grandson, Tuqa-Timur. He appears in history in 1376, trying to overthrow his uncle Urus Khan, ruler of the White Horde, and fleeing to the great Timur. Tokhtamysh outlived Urus and both his sons, and forcefully ascended to the throne of the White Horde in 1378, with Timur's backing.

Tokhtamysh dreamt of emulating his ancestors and made plans to reunite the Golden Horde. In 1380, he invaded the Blue Horde by fording across the Volga, and defeated Mamai during the Second Battle of the Kalka River. The ruler of the Blue Horde, Mamai, was killed shortly after the Battle of Kulikovo, marking Tokhtamysh's victory and the reunification of the Golden Horde. 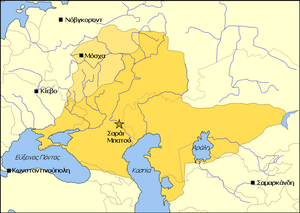 The full extent of Tokhtamysh's authority. 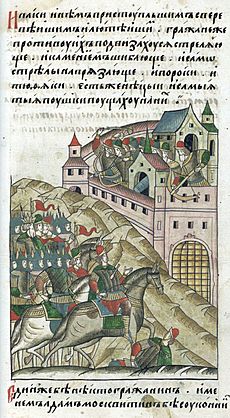 Tokhtamysh and the armies of the Golden Horde rally in front of Moscow, 1382.

Dmitry Donskoy had raised a large army to defeat and suppress the Mongol–Tatar hordes, and, after defeating Mamai during the Battle of Kulikovo, could not raise another army against Tokhtamysh Khan.

Having reunited the Blue and White Hordes into the Golden Horde, in 1382, Tokhtamysh led a successful campaign against Russia as a punishment for the Kulikovo defeat - setting back, though not ending, the Russian aspiration to free themselves of Tatar rule. In just six years, Tokhtamysh had reunified the lands of the Golden Horde from Crimea to Lake Balkhash.

After three days of siege, Tokhtamysh was faced with a stalemate, until Donskoy's brothers-in-law prince of Nizhnii Novgorod Dmitry of Suzdal tricked citizens into surrendering the city. The destruction of Moscow led to Dimitry's surrender to the authority of Tokhtamysh at the end of 1382. Tokhtamysh also took Donskoy's son Vasily I of Moscow hostage.

Tokhtamysh started to act as a sovereign ruler, which must have worried his former suzerain Timur, who as a result invaded Tokhtamysh twice; in 1391 and in 1395, eventually supplanting him and imposing Temür Qutlugh as a khan of Golden Horde. Tokhtamysh took refuge in Lithuania, at the court of grand duke Vytautas.

In 1397 both rulers signed a treaty in which Tokhtamysh confirmed Vytautas as a rightful ruler of Ruthenian lands that were once part of the Golden Horde, and now belonged to Lithuania, in exchange of military assistance. It is possible that the treaty required Vytautas to pay tribute from these lands once the khan regained his throne. Vytautas probably was planning to establish himself as overlord in Tatar lands. This joint expedition, supported by Polish volunteers under Spytek of Melsztyn, was defeated on 12 August 1399 in the Battle of the Vorskla River by forces led by Temiir Kutlugh and Nogay emir Edigü. The defeat was disastrous, ending Vytautas's ambitious policy in the Pontic steppe and forcing Tokhtamysh to seek refuge again, this time in Siberia. About twenty princes, among them Andrei of Polatk and Dmitry of Briansk were killed, along with many prominent lords, like Spytko.

Tokhtamysh died in Siberia in 1406. 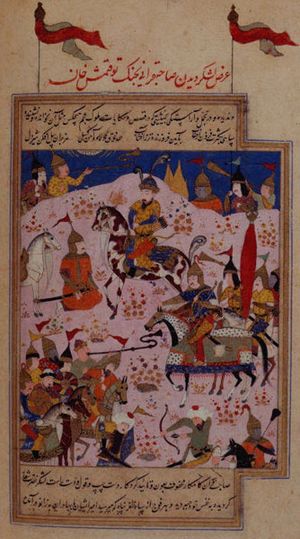 Timur and his troops gather to launch a war against the Golden Horde Khan Tokhtamysh.

Believing he could defeat the Ilkhanate Chobanids and capture the disputed territories of the Caucasus since the days of Berke Khan, in 1385 Tokhtamysh, with an army of 50,000 (or five tumens), invaded Persia and took Tabriz. Returning north they took 200,000 slaves from the Caucasus, including tens of thousands of Armenians from the districts of Parskahayk, Syunik, and Artsakh. This proved to be a fatal error for Tokhtamysh, who moved north from the Caucasus, thus allowing his Ilkhanate rivals to side with Timur, who annexed Persia to his own expanding kingdom. Furious, Tokhtamysh turned back and made war on his former ally.

Eventually, Tokhtamysh conceded defeat and withdrew to the steppe. However, in 1387 he suddenly invaded Transoxiana, the heart of Timur's realm. Unfortunately for Tokhtamysh, heavy snow forced him back to the steppe.

Tokhtamysh escaped to the Ukrainian steppes and asked for help from the Grand Duke Vytautas of Lithuania. In the great Battle of the Vorskla River (1399) the combined forces of Tokhtamysh and Vytautas were defeated by two of Timur's generals, khan Temur Qutlugh and emir (murza, visir) Edigu. The defeated Tokhtamysh was killed near present-day Tyumen by Edigu's men in 1406.

He was the last khan who minted coins with Mongolian script.

All content from Kiddle encyclopedia articles (including the article images and facts) can be freely used under Attribution-ShareAlike license, unless stated otherwise. Cite this article:
Tokhtamysh Facts for Kids. Kiddle Encyclopedia.