Vasily I of Moscow facts for kids

Kids Encyclopedia Facts
In this article, the patronymic is Dmitriyevich. 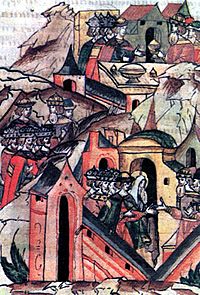 Vasily I visiting his father-in-law, Vytautas the Great.

While still a youth, Vasily, who was the eldest son of Grand Prince Dmitry Donskoy (ruled Moscow 1359–89), travelled to the Tatar khan Tokhtamysh (1383) to obtain the Khan's patent for his father to rule the Russian lands as the grand prince of Vladimir. Diplomatically overcoming the challenge of the prince of Tver, who also sought the patent, Vasily succeeded in his mission. But he was subsequently kept at Tokhtamysh's court as a hostage until 1386 when, taking advantage of Tokhtamysh's conflict with his suzerain Timur Lenk (Tamerlane), he escaped and returned to Moscow.

Vasily I continued the process of unification of the Russian lands: in 1392, he annexed the principalities of Nizhny Novgorod and Murom. Nizhny Novgorod was given to Vasily by the Khan of the Golden Horde in exchange for the help Moscow had given against one of his rivals. In 1397–1398 Kaluga, Vologda, Veliki Ustyug and the lands of the Komi peoples were annexed.

To prevent Russia from being attacked by the Golden Horde, Vasily I entered into an alliance with the Grand Duchy of Lithuania in 1392 and married Sophia of Lithuania, the only daughter of Vytautas the Great. The alliance turned out to be fragile, and they waged war against each other in 1406–1408.

Mongol emir Timur raided the Slavic lands in 1395; he ruined the Volgan regions but did not penetrate as far as Moscow. Timur's raid was of service to the Russian prince as it damaged the Golden Horde, which for the next twelve years was in a state of anarchy. During the whole of this time no tribute was paid to the khan, Olug Moxammat, though vast sums of money were collected in the Moscow treasury for military purposes.

In 1408 Edigu burnt Nizhny Novgorod, Gorodets, Rostov, and many other towns but failed to take Moscow, though he had still burnt it. In 1412, however, Basil found it necessary to pay the long-deferred visit of submission to the Horde.

The growing influence of Moscow abroad was underlined by the fact that Vasily married his daughter Anna to Emperor John VIII Palaeologus of Byzantium. 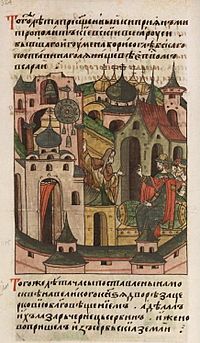 During his reign, feudal landownership kept growing. With the growth of princely authority in Moscow, the judicial powers of landowners were partially diminished and transferred to Vasily's deputies and heads of volosts.

Russian (East Slavic) chronicles speak of a monk, Lazar the Serb, newly arrived from Serbia, inventing and building a clock on a tower in the Grand Prince's palace in Moscow behind the Cathedral of the Annunciation at the request of Vasily I, in 1404. It was the first ever mechanical clock in Russia, and also the country's first public clock. It was among the first ten such advanced clocks in Europe, and was regarded as a technical miracle at the time.

The most important ecclesiastical event of the reign was the elevation of the Bulgarian, Gregory Tsamblak, to the metropolitan see of Kiev by Vytautas, grand-duke of Lithuania; the immediate political consequence of which was the weakening of the hold of Moscow on the south-western Russian states.

Vasily married Sophia of Lithuania, a daughter of Vytautas the Great and his wife, Anna. They had nine known children:

All content from Kiddle encyclopedia articles (including the article images and facts) can be freely used under Attribution-ShareAlike license, unless stated otherwise. Cite this article:
Vasily I of Moscow Facts for Kids. Kiddle Encyclopedia.