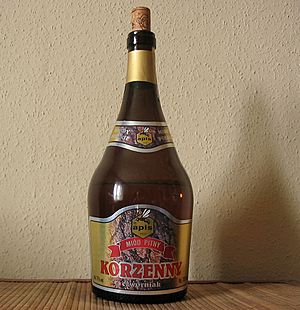 Mead is a fermented alcoholic drink. It is made from honey. Its history is possibly as old as that of beer. It is made by mixing honey, water, and yeast. Some kinds of mead also include spices or fruit. Mead is sometimes called "honey wine".

Archaeologists discovered that people made mead 9,000 years ago. Mead was described in the Rigveda, which is a Hindu religious text. Mead is popular in Central Europe and the Balkans. Mead is also made in Ethiopia and South Africa.

All content from Kiddle encyclopedia articles (including the article images and facts) can be freely used under Attribution-ShareAlike license, unless stated otherwise. Cite this article:
Mead Facts for Kids. Kiddle Encyclopedia.