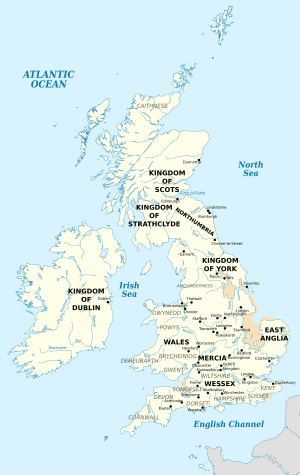 Athelstan or Æthelstan, (893/4–27 October 939), called the Glorious, was the first King of England. He reigned from 924 to 939. He was the son of King Edward the Elder. Athelstan's reign is sometimes overlooked but it was of great importance to political developments in the 10th century.

Athelstan was the son of Edward the Elder, and grandson of Alfred the Great. His father succeeded, after some difficulty, to the Kingdom of the Anglo-Saxons formed by Alfred. His father had also been the King of Mercia. When Edward died Athelstan quickly became King of Mercia but he was not immediately accepted as King of England. His brother, Ælfweard, had more support in England but died soon after Edward. This made it easier for Athelstan to become king.

For Athelstan it was very important to have many allies. A year after his crowning he married one of his sisters to the Viking King of Northumbria, Sithric. However, Sithric died only a year later, and Athelstan seized Northumbria. This move made him king of more land than any other before him, roughly the same as modern England. Historical records indicate that the other rulers in Great Britain accepted him as king at Bamburgh around this time.

Athelstan died at Gloucester in 939 and was succeeded by his half-brother, Edmund I.

All content from Kiddle encyclopedia articles (including the article images and facts) can be freely used under Attribution-ShareAlike license, unless stated otherwise. Cite this article:
Athelstan Facts for Kids. Kiddle Encyclopedia.