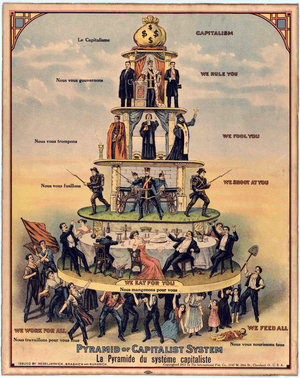 An Industrial Workers of the World poster (1911)

Anti-capitalism describes a wide variety of movements, ideas, and attitudes which oppose capitalism, toward social equality or environmentalism. Anti-capitalists, in the strict sense of the word, are those who wish to completely replace capitalism with another system; however, there are also ideas which can be characterized as partially anti-capitalist in the sense that they only wish to replace or abolish certain aspects of capitalism rather than the entire system.

All content from Kiddle encyclopedia articles (including the article images and facts) can be freely used under Attribution-ShareAlike license, unless stated otherwise. Cite this article:
Anti-capitalism Facts for Kids. Kiddle Encyclopedia.