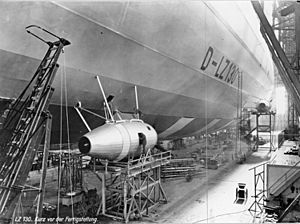 The LZ 130 under construction.

The LZ 130 Graf Zeppelin ΙΙ was the last Zeppelin built in the time between World War 1 and World War 2. Built from the same blueprints as its sister the LZ-129 Hindenburg, in October, 1937, LZ-130 was modified to use helium after the LZ-129 Hindenburg crash, delaying her first flight. Because helium provides less lift than hydrogen, LZ-130’s passenger capacity was reduced from the 72 carried by Hindenburg to just 40.

All content from Kiddle encyclopedia articles (including the article images and facts) can be freely used under Attribution-ShareAlike license, unless stated otherwise. Cite this article:
LZ 130 Graf Zeppelin Facts for Kids. Kiddle Encyclopedia.