Bertrand Piccard FRSGS (born 1 March 1958) is a Swiss explorer, psychiatrist and environmentalist. Along with Brian Jones, he was the first to complete a non-stop balloon flight around the globe, in a balloon named Breitling Orbiter 3. He was the initiator, chairman, and pilot, with André Borschberg, of Solar Impulse, the first successful round-the-world solar-powered flight. In 2012 Piccard was designated as a Champion of the Earth by the UN Environment Programme.

As a child, Piccard was taken to the launch of several space flights from Cape Canaveral. He developed early interests in flight and human behaviour in extreme situations. He received a degree from the University of Lausanne in psychiatry. He has since become a lecturer and supervisor at the Swiss Medical Society for Hypnosis (SMSH).

Piccard obtained licenses to fly balloons, airplanes, gliders, and motorized gliders. In Europe, he was one of the pioneers of hang gliding and microlight flying during the 1970s. He became the European hang-glider aerobatics champion in 1985. 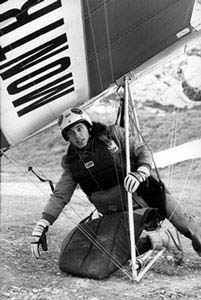 On 1 March 1999, Piccard and Brian Jones took off in the balloon Breitling Orbiter 3, a bright red, carbon-composite, egg-shaped craft measuring sixteen feet long and seven feet in diameter, from Château d'Oex in Switzerland on the first successful non-stop balloon circumnavigation of the globe—- the first circumnavigation not requiring any fuel for forward motion. Piccard and Jones, in cooperation with a team of meteorologists on the ground, maneuvered into a series of jet streams that carried them 25,361 miles to land in Egypt after a 45,755 km (28,431 mi) flight lasting 19 days, 21 hours, and 47 minutes. In recognition of this accomplishment, Piccard received awards including the Harmon Trophy, the FAI Gold Air Medal and the Charles Green Salver.

During November 2003, Piccard announced a project, in cooperation with the École Polytechnique Fédérale de Lausanne (EPFL), for a solar-powered, long-range aircraft named Solar Impulse. Piccard began construction during 2007, and conducted brief test flights during 2008 with André Borschberg. By 2009, he had assembled a multi-disciplinary team of fifty specialists from six countries, assisted by approximately one hundred outside advisers.

The project is financed by a number of private companies and individuals in Europe. The first company to fund the project officially was Semper, after Eric Freymond was convinced of its future success by Piccard. Owing to international funding for the project, the Solar Impulse is a European craft, not a Swiss one, despite scientific and medical assistance from the EPFL and Hirslanden Clinique Cecil.

During 2010, Solar Impulse 1 (Si1) made its first nighttime flight. During 2011, it landed at Bourget Field in Paris. During 2012, it made its first intercontinental flight from Switzerland to Morocco in two legs. The first leg in the one-seater aircraft was piloted by Borschberg from Payerne, Switzerland to Madrid, Spain, and the second leg by Piccard from Madrid to Rabat, Morocco. During 2013, he and Borschberg traversed the United States from Mountain View, California to JFK Airport in New York City. There were several stops along the way, including Washington, D.C.

During 2015, the objective was to accomplish the first round-the-world solar flight in history. The voyage consisted of multiple flights started on 9 March and scheduled to conclude about five months later. In order to switch pilots, stopovers were scheduled at locations in India, Myanmar, China, United States, and southern Europe or northern Africa. Piccard piloted the ninth segment of the round-the-world trip and landed the Solar Impulse 2 (Si2) in Moffett Field in California on 24 April 2016 after three days of flying from Kalaeloa Airport, Hawaii.

André Borschberg and Piccard completed their circumnavigation of the globe with the solar-powered aircraft Solar Impulse on 26 July 2016. On the same day, they announced the creation of the International Committee of Clean Technologies.

For his role in delivering and piloting Solar Impulse, Bertrand was awarded the Mungo Park Medal by the Royal Scottish Geographical Society in 2018. This was awarded jointly with André Borschberg.

Bertrand Piccard is married, and is the father of three children.

A family tree of adventurers

Piccard's family tree includes four generations of explorers. His grandfather, Auguste Piccard, was the first to fly to the stratosphere, in 1931. His father, Jacques Piccard, was first to descend to the bottom of the Mariana Trench, in 1960. His great uncle Jean Félix Piccard and aunt Jeannette Piccard were also balloonists, with their son Donald Piccard first to fly across the English Channel in a balloon. The family's attitude, Piccard once explained, is that being told that something is impossible is " exactly why we try to do it."

All content from Kiddle encyclopedia articles (including the article images and facts) can be freely used under Attribution-ShareAlike license, unless stated otherwise. Cite this article:
Bertrand Piccard Facts for Kids. Kiddle Encyclopedia.