André Borschberg FRSGS (born December 13, 1952) is a Swiss entrepreneur, explorer, pilot and speaker. He is the co-founder of the Solar Impulse project, the first ever round-the-world solar flight, successfully completed in July 2016. During the Japan-to-Hawaii leg, André broke the world record for longest solo flight in an airplane of any kind: 117 hours and 52 minutes, breaking Steve Fossett's 2006 record. Before that, on 7 July 2010, André completed the first 24-hour solar powered flight. The flight set records for the longest manned solar-powered flight and the greatest height reached by a manned solar aircraft.

Borschberg flew as a jet pilot in the Swiss Air Force prior to his work with Solar Impulse. An engineer by education and a graduate of the MIT Sloan School of Management, André Borschberg has solid experience in creating and managing companies. His passion for aviation and his interest in innovative solutions have led him to team up with Bertrand Piccard as CEO, co-founder and pilot of Solar Impulse.

For his role in delivering and piloting Solar Impulse, André was awarded the prestigious Mungo Park Medal by the Royal Scottish Geographical Society in 2018. This was awarded jointly with Bertrand Piccard.

Fascinated by aviation from his earliest youth, André Borschberg trained as a pilot in the Swiss air force, flying first Venoms and then Hunters and Tigers for over 20 years. Today he holds both professional aeroplane and helicopter pilots' licences and also does aerobatics in his spare time.

After graduating from the École Polytechnique Fédérale de Lausanne (EPFL) in mechanics and thermodynamics, André Borschberg has constantly developed and led numerous technology projects, companies and start-ups, as both investor and entrepreneur. He very quickly supplemented his training with a Master's in Management Science from the MIT Sloan School of Management, preceded by certificates in financial management and business management at HEC Lausanne. He first joined McKinsey, one of the world's leading business consultancies, as a consultant for five years, before starting his own entrepreneurial activities.

His strong points are business organisation, management and development. From finance to marketing, from engineering to human resources, André Borschberg has acquired solid experience as an entrepreneur, manager and consultant for over 20 years. He went initially into partnership with a venture capital company, Lowe Finance. His vast range of professional skills, his versatility and his perseverance enabled him to successfully launch two start-ups in the Internet and new technologies field. With a technical team from EPFL, he co-founded Innovative Silicon, a technology company in the field of microprocessor memories. 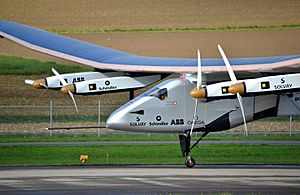 André Borschberg and Bertrand Piccard released in 2017 Objectif Soleil, a book about how they lived through Solar Impulse project.

At the head of the project Solar Impulse with Bertrand Piccard, André Borschberg brings the essential skills of an entrepreneur who contributes to convert vision into reality. As the CEO, he has put together and motivated a team of 65 top specialists and numerous partners, all from very diverse horizons and origins. "This diversity we have sought at every level stimulates their creativity and gives them their strength. It is from this pooling of experiences that original and totally-new solutions arise.”

As a mechanical engineer and pilot, he is directing the construction of the aircraft and the preparation of the flight missions. "We need to find a way to build an aircraft that is super-robust & super-light at the same time, and above all extremely efficient with energy consumption, so as to need only minuscule amounts of energy in order to fly. But with the same degree of resistance as a normal airplane. Hence the great complexity of the project, which gives the true measure of its philosophy and its objectives."

The emergency department of the Hirslanden Clinique Cecil is the official medical partner of Bertrand Piccard and André Borschberg’s world tour for Solar Impulse.

On 7 July 2010, André Borschberg has, for the first time in history, flown 26 hours with the Solar Impulse aeroplane, demonstrating at the same time the possibilities to fly day and night with only solar energy to propel the aeroplane.

Solar Impulse HB-SIA, piloted by André Borschberg, completed three international flights during the European campaign: Payerne to Brussels on 13 May (630 km), Brussels to Paris-Le Bourget on 14 June (395 km) and Paris-Le Bourget to Payerne on 3 July (426 km).

Solar Impulse, piloted alternately by André Borschberg and Bertrand Piccard, made its first intercontinental flight in 2012 from Switzerland (Payerne) to Toulouse, and then on to Morocco.

Solar Impulse has completed the historic crossing of the United States over a 2-month period of the summer of 2013. Bertrand Piccard and André Borschberg, the two pilots, flew from San Francisco to New York, stopping over in cities along the way.

With the goal of the world's first solar powered round the world flight initiated on March 9, 2015, these flights have provided good learning opportunities in terms of slotting the solar aircraft into international air space and landing at international airports.

Taking turns at the controls of the airplane with his partner Bertrand Piccard for the first ever round-the-world solar flight, successfully achieved in July 2016.

With the Solar Impulse 2, he broke the record of the longest solo flight, previously held by Steve Fosset. On 3 July 2015, Borschberg flew the solar powered airplane between Nagoya (Japan) and Kalaeloa, Hawaii (US) for a duration of 4 days, 21 hours and 52 minutes.

In early 2017 Borschberg co-founded the Swiss tech start-up H 55 based in Sion. H55 is a technological spinoff of Solar Impulse. The company develops and sells electric propulsion technologies to aircraft manufactures.

In 2017 the company launched its first aircraft, the Aerol, followed by the Bristell Energic in 2019.

All content from Kiddle encyclopedia articles (including the article images and facts) can be freely used under Attribution-ShareAlike license, unless stated otherwise. Cite this article:
André Borschberg Facts for Kids. Kiddle Encyclopedia.