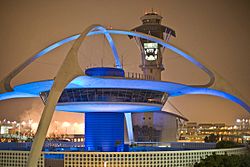 The Theme Building is a Space Age structure at Los Angeles International Airport in California. It was influenced by "Populuxe" architecture. It is built in a Mid-century modern style now called "Googie". It was built between 1957 and 1961. It was listed as a Historical-Cultural Monument by the city of Los Angeles in 1993.

All content from Kiddle encyclopedia articles (including the article images and facts) can be freely used under Attribution-ShareAlike license, unless stated otherwise. Cite this article:
Theme Building Facts for Kids. Kiddle Encyclopedia.