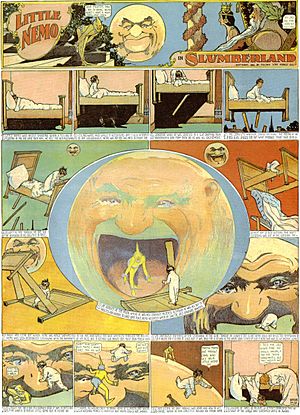 The comic was about the dreams of a little boy named Nemo. His name means "nobody" in Latin. In the first strips he tried to go to Slumberland. That was the land of King Morpheus. The King wanted Nemo as a friend for his daughter, the Princess. The last picture in each strip always was Nemo waking up, in or near his bed. Then the grownups were angry with him, because he had waken them up. Or they comforted him because he was sad.

In the earliest strips, the dream would end because of a disaster that could hurt or kill Nemo. These events would be something like falling from a bridge, becoming a monkey, or becoming 90 years older. Later on Nemo reached Slumberland. Then Flip always woke him up. Flip wore a hat that had 'Wake Up' written on it. Other characters in the strip were Dr. Pill, The Imp, the Candy Kid, and Santa Claus.

The strip was not a very big success from 1905 to 1927. Most comics readers liked the slapstick actions of the Katzenjammer Kids, Happy Hooligan, and Buster Brown (other comic strips) more than the surreal (not real) fantasy of Nemo. From the 1970s until now, people like the strip more. Many of the original strips were found at a comic strip studio in 1966. They were shown at the Metropolitan Museum of Art. Very special of Nemo was that the pictures were very difficult, had many details and beautiful colours. Also the story was special, because it was a fast story and had many strange characters and places.

All content from Kiddle encyclopedia articles (including the article images and facts) can be freely used under Attribution-ShareAlike license, unless stated otherwise. Cite this article:
Little Nemo Facts for Kids. Kiddle Encyclopedia.