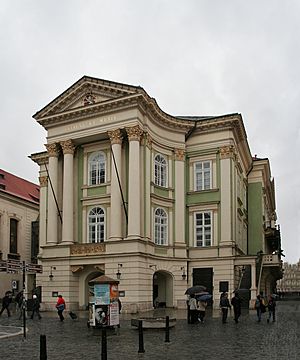 The Estates Theatre or Stavovské divadlo in Prague is one of the oldest and most beautiful opera houses in Europe.

The Estates Theatre was built during the late 18th century. At first it was known as Count Nostitz’s Theatre. The theatre opened in 1783 with a performance of the tragedy Emilia Galotti by the German playwright Gotthold Lessing. It was built in the Neoclassical style. Today it is one of the very few theatres that have hardly changed since it was built.

Many of the greatest artists worked or had their music or plays performed in the Estates Theatre. In 1787 the first performance took place of Wolfgang Amadeus Mozart's opera Don Giovanni. Mozart's opera La Clemenza di Tito was also staged there for the first time in celebration of the coronation of Emperor Leopold II. Other famous people who conducted there were Carl Maria von Weber and Gustav Mahler.

Czech plays were often performed there. This made people interested in performing in Czech and so, in 1848, the National Theatre was built.

Today the Estates Theatre is still famous for dramas, ballets and operas. The opera company especially perform the operas of Wolfgang Amadeus Mozart. The movie about Mozart which was called Amadeus was filmed in the Estates Theatre.

All content from Kiddle encyclopedia articles (including the article images and facts) can be freely used under Attribution-ShareAlike license, unless stated otherwise. Cite this article:
Estates Theatre Facts for Kids. Kiddle Encyclopedia.