Axel Evert Taube ( 12 March 1890– 31 January 1976) was a Swedish author, artist, composer and singer. He is widely regarded as one of Sweden's most respected musicians and the foremost troubadour of the Swedish ballad tradition in the 20th century.

Evert Taube was born in 1890 in Gothenburg, and brought up on the island of Vinga, Västergötland, where his father, Carl Gunnar Taube, a ship's captain, was the lighthouse keeper. His mother was Julia Sofia Jacobsdotter. Taube belongs to an untitled branch of the Baltic German noble Taube family, introduced at the Swedish House of Nobility in 1668 as noble family No. 734. 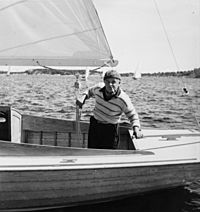 Taube at Sandhamnsregattan in 1942 on his Nordic Folkboat F-S74 Carmencita of Sjösala.

Having spent two years (1907–1909) sailing around the Red Sea, Ceylon and South Africa, Taube began his career as a singer-songwriter and collector of sailors' songs, and on Christmas Eve 1908, on board the Norwegian ship SS Bergen headed for Spain, he performed "Turalleri, piken fra Hamburg".

Following a five-year stay (1910–1915) in Argentina, he developed an interest in Latin American music and introduced the Argentinian tango to Sweden in the twenties. Contrary to widespread perceptions, Taube did not work as a gaucho (cowboy) on the Pampas but as a foreman supervising workers who were digging canals designed to prevent flooding on the vast plains.

He is perhaps best known as a depictor of the idyllic, with motifs from the Swedish archipelagoes and from the Mediterranean, from a perspective every Swedish four-week holiday tourist could recognize. But he also wrote the most hitting anti-fascist anti-war poem in the Swedish language, "Målaren och Maria Pia", about the Italian war in Abyssinia, from the late 30s, as well as the anthem of the budding environmental movement in the 70s, "Änglamark" (originally written for the successful 1971 Hasse & Tage film The Apple War).

Taube´s literary secretary Inga-Britt Fredholm was from late 1950s working as a secretary at the Park Avenue Hotel in Gothenburg. There, in 1962, Evert Taube met her and this led to her becoming his literary secretary for more than ten years. During the 1964–1965 period she undertook travel for work, along with Taube, going to the Antibes in France and to the Pampas in Argentina. She collaborated with Astri Taube on "Vid tiden för Astri och Apollon: okända dikter och berättelser", published in 1964.

Taube has been translated into English by Helen Asbury, Paul Britten Austin, Emily Melcher and others. His songs have been recorded in English by Roger Whittaker, Sven-Bertil Taube, Martin Best, Roger Hinchliffe and Emily Melcher. 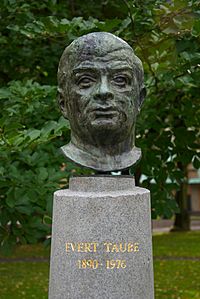 Taube's memorial on the churchyard of Maria Magdalena Church, Stockholm (1976). 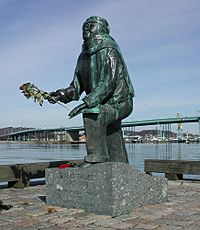 Sculpture in bronze of Evert Taube by Eino Hanski at Gothenburg opera house in Gothenburg (1996). 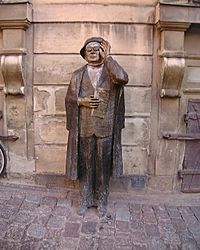 Statue of Evert Taube at Järntorget in Stockholm (1985).

In 1925, he married Astri Bergman Taube, a painter and sculptress.

Taube died in Stockholm and is buried on the churchyard of Maria Magdalena Church on Södermalm.

Taube had a summer house called Sjösala, located in Stavsnäs, which was burned down by Mona Wallén-Hjerpe in 1969.

On his 60th birthday in 1950, Taube received the Bellman Award from the Swedish Academy and in 1960 he received an honorary doctorate from Gothenburg University. He was elected as a member of the Royal Swedish Academy of Music in 1970.

Taube is regarded as one of the finest troubadours in Sweden. There is a complete pavilion, "Evert Taube's World" opened in 2008, dedicated to him at Liseberg Theme Park in Gothenburg.

All content from Kiddle encyclopedia articles (including the article images and facts) can be freely used under Attribution-ShareAlike license, unless stated otherwise. Cite this article:
Evert Taube Facts for Kids. Kiddle Encyclopedia.