The Building includes offices of the Secretary of the Interior and Department employees. It also includes the Interior Museum and Interior Library.

From 1852 to 1917, the Interior Department was headquartered in the Patent Office building, which today houses the National Portrait Gallery and the Smithsonian American Art Museum of the Smithsonian Institution. From 1917 until the completion of the Main Interior Building, the Interior Department was housed in what is now the U.S. General Services Administration Building, between E and F Streets and 18th and 19th Streets NW.

By the time President Franklin D. Roosevelt took office, the Department of the Interior had outgrown its headquarters, and satellite offices in 15 additional rented offices in Washington left employees scattered across the city and overcrowded. Plans for a new headquarters were undertaken by Roosevelt's Secretary of the Interior, Harold L. Ickes. Sworn in on March 4, 1933, immediately after the Roosevelt administration took office, Ickes received permission from President Roosevelt to take over the soon-to-be finished Interstate Commerce Building in the Federal Triangle area, but this plan was difficult because it required an act of Congress. As an alternative, Roosevelt recommended that funds be appropriated for a new building specifically for the Department. In 1934 Ickes - who as Administrator of Public Works led the Public Works Administration in addition to his position of Secretary - allotted $12.74 million, with the approval of the President, for a new Interior building.

Three sites were considered for the Interior Building: One on the National Mall facing Constitution Avenue between 12th and 14th Streets NW, the current site of the National Museum of American History; another on a cluster of small lots on the east, west, and north sides of the old Interior Building; and a third just south of the old Interior building and Rawlins Park in the Foggy Bottom neighborhood. On March 21, 1934, the third proposed site was selected. The plot including the area between 18th and 19th Streets and C and E Streets NW and was one of the few double-block sites in the city where an intervening street (D Street) could be eliminated for development.

Prominent Washington architect Waddy Butler Wood was selected to design the new Interior Building. Secretary Ickes was deeply involved in the design of the new building, and the January 9, 1937 edition of the Washington Daily News stated that "Secretary Ickes has a paternal concern for the new Interior Building. He designed most of it himself, and financed it through PWA." Ickes did not design the building, but many of its features were a result of its influence in the planning, design, and construction stages.

The building designed aimed for utility and economy. Significant aspects include wide central corridors, open courtyards, the movable steel office partitions, the acoustically treated ceilings, a floor reserved for mechanical equipment, and fireproofing. Ickes had air conditioning installed in his office in the Old Interior Building and insisted that central air condition be included throughout the building so that all employees could enjoy it, the first such system in a large government building. Melding aspects of practicality and aesthetics, the Main Interior Building became "one of the most functional and innovative government office structures in Washington" in the 1930s. Ickes reported in a Cabinet meeting that the Interior Building cost 10 to 15 percent less to operate than the buildings in the Federal Triangle even with air conditioning, and cost less per square foot. Ickes also included that group assembly space and employee amenities be added to the building, including the Conference Hall (Auditorium), the Activity Space (Gymnasium), the Cafeteria with courtyard, the Employees Lounge (South Penthouse, now offices) with soda fountain, the Interior Museum, the Art Gallery (currently offices), the Indian Arts and Crafts Shop, the Broadcasting Studio (North Penthouse), and the parking garage.

Systems for maintainable, efficiency, and fire protection were also included in the design. These included a central vacuum system, a floor between the fifth and sixth floors for mechanical equipment (including plumbing, electrical panels, telephone equipment, and air conditioning) and fire and security systems (automatic sprinklers in the parking garage and storage areas, a fire detection system on the mechanical floor, and 11 stairways for rapid evacuation).

Despite the functionalism of the building, art and architecture are also featured, including decorative detailing such as bronze grilles and hardware, the light fixtures, and plaster moldings, "reflecting the architect's and his client's concern for design materials and craftsmanship." Some architectural details feature Interior Department symbols, including a buffalo motif on doors. The building contains more Public Work Administration artwork than any other government building and includes the work of the second-highest number of PWA artists, more than any except the Franklin Street Post Office Station in Washington.

As in other aspects of the building design, Ickes was involved in every step of artwork:

In Ickes' official portrait the plans for the Main Interior Building are lying on the table in front of him.

Construction of Main Interior began in April 1935 and was completed in December 1936. The building was the first D.C. New Deal building - authorized, designed, and built by the Roosevelt administration. It was notable for the speed of its completion, with construction taking just 18 months. The Interior Museum described the double city block building as "monumental...Its colossal pilasters and pillars emphasize monumental scale rather than relate the size of the building to the individual. It was meant to emphasize a new "heroic age of government," and every aspect of the building tells this story."

At the dedication ceremony held on April 16, 1936, President Roosevelt referred to the building as "symbolical of the Nation's vast resources" and the "cornerstone of a conservation policy that will guarantee the richness of their heritage," while Ickes saw it as a "symbol of a new day." 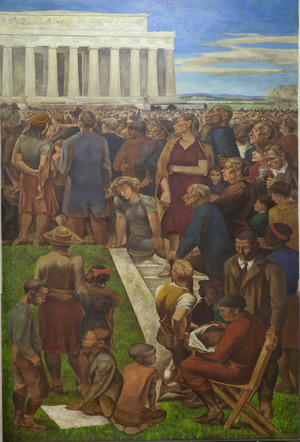 Mitchell Jamieson's 1943 mural An Incident in Contemporary American Life, at the United States Department of the Interior Building, depicts the scene of Marian Anderson's 1939 concert at the Lincoln Memorial

Other murals in the building are by Maynard Dixon, Gifford Beal, and William Gropper. Among them:

All content from Kiddle encyclopedia articles (including the article images and facts) can be freely used under Attribution-ShareAlike license, unless stated otherwise. Cite this article:
Main Interior Building Facts for Kids. Kiddle Encyclopedia.