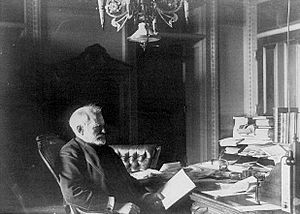 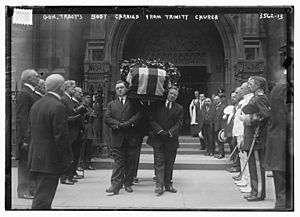 Benjamin Franklin Tracy (April 26, 1830 – August 6, 1915) was a United States political figure who served as Secretary of the Navy from 1889 through 1893, during the administration of U.S. President Benjamin Harrison.

He was born in the hamlet of Apalachin located in the Town of Owego, New York on April 26, 1830.

Tracy was a lawyer active in Republican Party politics during the 1850s. He was a member of the New York State Assembly (Tioga Co.) in 1862.

He served in the Union Army during the Civil War, and commanded the 109th New York Infantry Regiment. At the Battle of the Wilderness in May, 1864, he was able to rally his men and hold the Union line. For his actions he subsequently was awarded the Medal of Honor. His citation reads: Tracy "seized the colors and led the regiment when other regiments had retired and then reformed his line and held it." Later that year, he became commandant of the Elmira prisoner of war camp, before being appointed Colonel of the 127th Infantry, U.S. Colored Troops, on August 23, 1864. Tracy was discharged from the volunteer service on June 13, 1865. On January 18, 1867, President Andrew Johnson nominated Tracy for appointment to the brevet grade of brigadier general of volunteers, to rank from March 13, 1865, and the U.S. Senate confirmed the appointment on February 21, 1867.

He resumed the practice of law after the war, and became active in New York state politics. He was United States Attorney for the Eastern District of New York from 1866 to 1877. In December 1881, he was appointed by Governor Alonzo B. Cornell to the New York Court of Appeals to fill the vacancy caused by the appointment of Judge Charles Andrews as Chief Judge after the resignation of Charles J. Folger. Tracy remained on the bench until the end of 1882 when Andrews resumed his seat after being defeated by William C. Ruger in the election for Chief Judge.

Tracy was noted for his role in the creation of the "New Navy", a major reform of the service, which had fallen into obsolescence after the Civil War. Like President Harrison, he supported a naval strategy focused more on offense, rather than on coastal defense and commerce raiding. A major ally in this effort was naval theorist Captain Alfred Thayer Mahan, who had served as a professor at the new Naval War College (founded 1884). In 1890, Mahan published his major work, The Influence of Sea Power upon History, 1660–1783—a book that achieved an international readership. Drawing on historical examples, Mahan supported the construction of a "blue-water Navy" that could do battle on the high seas.

Tracy's wife and child died in a fire at their residence in Washington, DC in 1890.

After leaving the Navy Department, Tracy again took up his legal practice. In 1896 he defended New York City Police commissioner Andrew Parker from accusations of negligence and incompetence by fellow commissioner Theodore Roosevelt in a performance that significantly embarrassed Roosevelt. He also helped end the Venezuela Crisis of 1895 by assisting Venezuela in negotiating a settlement to their boundary dispute with Great Britain.

Tracy was the Republican candidate to be the first Mayor of Greater New York City when the five boroughs consolidated in 1898. He came in third behind Democrat Robert A. Van Wyck and Seth Low of the Citizens' Union, winning 101,863 of the 523,560 votes cast in the election of 1897. Tracy was the president of the New York State Agricultural Society in 1897 and 1898, during which time he invited Van Wyck to attend the society's annual fair.

USS Tracy (DD-214) was named for him, as was the town of Tracyton, Washington.

Tracy Arm is a fjord in the U.S. state of Alaska that bears his name.

The Tracy Glacier, having its terminus near the head of the Inglefield Fjord in NW Greenland, was named after him by Robert Peary.

All content from Kiddle encyclopedia articles (including the article images and facts) can be freely used under Attribution-ShareAlike license, unless stated otherwise. Cite this article:
Benjamin F. Tracy Facts for Kids. Kiddle Encyclopedia.