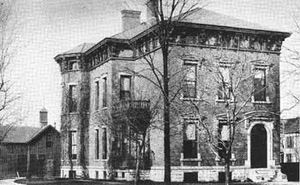 Harrison House in 1888, the year he became President

Benjamin Harrison arrived in Indianapolis in 1854 in order to begin a career as a lawyer. In 1867, following his service in the military, he bought a double lot from an auction, on what was then the outskirts of town, on North Delaware Street, just north of present-day I-65. In 1874 construction of a house on the property began, and was completed in 1875, at the cost of $24,818.67 (equal to $479,978 today). The trend for wealthier citizens of Indianapolis to move to the north side of town started with Benjamin Harrison moving his family to 1230 Delaware Street. When built, the property featured many elm and oak trees. Except for the time Benjamin Harrison served as United States Senator from Indiana (1881–1887), and his time as President of the United States (1889–1893), he lived at the home for the rest of his life. Benjamin Harrison died in the master bedroom of the house on March 13, 1901. While running for president in 1888, Benjamin Harrison issued campaign speeches to listeners on the street outside his home, in what were called "front-porch speeches". The front porch was not built until 1896, 3 years after he left the presidency.

The Italianate Benjamin Harrison House was built at 1230 Delaware Street from 1874 to 1875, using the plans of architect Herman T. Brandt. The red brick house has sixteen rooms. The bracketed cornices and three-story bay window are indicative of the Italianate architecture style. Interior features include an oak-trimmed walnut staircase, butternut woodwork, and parquet floors. Many renovations took place in 1896, which included electricity and the front porch.

Presently, the house is open for tours throughout the week. Ten of the sixteen rooms are open for visitors, all decorated in the Victorian style typical of Benjamin Harrison's time at the residence. 75% of the 3,700 pieces of memorabilia actually belonged to Benjamin Harrison and his family, and the books in the museum number 2,440. Besides archives regarding Benjamin Harrison, the house also features archives of the Daughters of the American Revolution. The front parlor is set to look as it did when Benjamin Harrison brought his new bride to the house.

All content from Kiddle encyclopedia articles (including the article images and facts) can be freely used under Attribution-ShareAlike license, unless stated otherwise. Cite this article:
Benjamin Harrison Presidential Site Facts for Kids. Kiddle Encyclopedia.