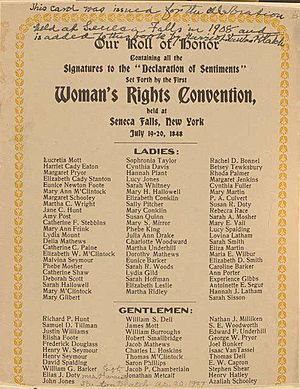 Signers of the Declaration of Sentiments at Seneca Falls in order: Lucretia Coffin Mott is on top of the list

The Seneca Falls Convention was a meeting of people who supported Women's rights. It was at Seneca Falls, New York in on July 19 and July 20, 1848. Elizabeth Cady Stanton, a women's rights activist, wrote a "Declaration of Sentiments" that would list some things she believed and that would be talked about at the meaning. One of these ideas was that men and women are equal. Many of the people there were Quakers, which is a sect of Christianity. Over one hundred people who were there signed a document called the Seneca Falls Declaration. Both men and women signed it. One man at the meeting was Frederick Douglass.

Many women were upset that they did not have the same rights as men. They could not vote, sign contracts, or buy property. If they were married, they had to give any money they earned to their husbands. They also made less money than men.

All content from Kiddle encyclopedia articles (including the article images and facts) can be freely used under Attribution-ShareAlike license, unless stated otherwise. Cite this article:
Seneca Falls Convention Facts for Kids. Kiddle Encyclopedia.