Kids Encyclopedia Facts
This page is about the hawk. For other uses, see Pall Mall (disambiguation).

Pale Male (hatched in 1990) was a red-tailed hawk who resided near New York City's Central Park. Birdwatcher and author Marie Winn gave him his name because of the unusually light coloring of his head. He was one of the first red-tailed hawks known to have nested on a building rather than in a tree and is known for establishing a dynasty of urban-dwelling red-tailed hawks. Each spring, bird watchers set up telescopes at the Model Boat Pond to observe his nest and chicks at 927 Fifth Avenue. As of 2015, he is presumed deceased.

When he arrived in Central Park in 1991, as a first-year immature hawk, Pale Male tried to nest in a tree, but he was driven off by crows. He later roosted on a building on Fifth Avenue across the street from the park. Around early 1992, he found a mate, dubbed "First Love". First Love was injured later that year and removed to the Raptor Trust in New Jersey. During her absence, Pale Male took another mate, named Chocolate. After several unsuccessful spring nesting attempts, Pale Male and a mate, possibly Chocolate, hatched 3 eyasses in 1995. The eyasses survived to young adulthood and took up residence in Central Park. Chocolate died later that year from injuries from a collision with a car on the New Jersey Turnpike.

First Love returned to Central Park after being banded and released from the Raptor Trust. She and Pale Male reunited and raised several eyasses. Some birdwatchers waited several months to see the eyasses grow and then take their first flights. Pale Male brought food to his offspring about five times each day. In 1997, First Love died after eating a poisoned pigeon in Central Park.

Pale Male's mate from 1998 to 2001 was a hawk known as Blue. The pair were observed to hatch about 11 eyasses in that period. Blue disappeared about the time of the September 11 attacks in 2001. In early 2002, Pale Male was first observed with a new mate, Lola. They raised 7 eyasses between 2002 and 2004, building a nest on ornamental stonework above a top-story window on a residential housing cooperative at 927 Fifth Avenue (at East 74th Street) on the Upper East Side of Manhattan. Lola disappeared in December 2010 and is presumed dead.

A new mate appeared in early January 2011. This new hawk, Lima (also called "Ginger", because of her dark feathers on her neck and chin), was only in her second year. She was a young adult, with still-yellow irises, indicating her exact age. Her first nesting attempt was in the winter and spring of 2011 using the existing nest. Ginger exhibited behavior consistent with incubation of eggs in mid-April 2011 and two eyasses emerged towards the end of May 2011, producing the first baby hawks in this nest since 2004. Lima died in late February 2012, presumably from a poisoned rat.

As of 2020[update], some people believed that Pale Male was apparently still alive at the age of 30. This would make him one of the oldest known red-tailed hawks on record. However, it was suggested in 2015 that Pale Male has probably died sometime over the years and been replaced by another male hawk with similar coloring. Since Pale Male was never banded, it is impossible to confirm whether the present Pale Male of 2020 is the same hawk who arrived in 1991.

Other red-tailed hawks in the area

At the south end of the park, a hawk couple dubbed Pale Male Junior (or simply "Junior") and Charlotte nested on the Trump Park hotel on Central Park South in 2005 and successfully raised two eyasses. For two years, their nest was on a building on Seventh Avenue at 57th Street (two blocks south of the park), after which Junior and Charlotte left the area. Following reports of red-tails attempting to nest on or near the Plaza Hotel at the southeast corner of Central Park, a pair of red-tails built a nest in a tree on the edge of the park's Sheep Meadow in 2014 and raised two baby hawks. That nesting site was active through 2016.

A hawk couple known as Tristan and Isolde claimed Central Park's Great Hill and North Wood as their territory in 2006, but their nest was located about four blocks from the park at the Cathedral of St. John the Divine, overlooking Morningside Park. Although both Tristan and Isolde have since died or disappeared, they and their successors at the cathedral nest had fledged 28 baby red-tails as of 2019.

Attempted red-tail nesting activity has been reported at other locations on the periphery of Central Park, including locations on Central Park West since 2013, but none have been successful.

The Central Park Christmas Bird Count, held December 17, 2006, determined that there were probably ten red-tailed hawks in the park that day, but it was expected that the extra four hawks would be driven off once the 2007 mating season began. It is common for two or three immature Red-tails, and sometimes an unattached adult, to spend the winter in the park before departing in the spring. 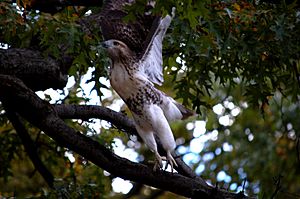 In recent years, many more red-tailed hawks have taken up residence in New York City. A 2007 study commissioned by the Audubon Society reported that pairs of red-tails were spotted breeding in nests at 32 locations throughout the city, and hawk watchers say they have spotted dozens of unattached Red-tails across the five boroughs. In 2014, there were eleven red-tailed nests reported in Manhattan, of which ten were known to have fledged baby hawks. Relatively small green spaces about the city, such as the main Columbia University campus, may see red-tailed hawk visitors, while slightly larger locations, such as Washington Square Park and the Fordham University Rose Hill campus, may have nesting pairs.

All content from Kiddle encyclopedia articles (including the article images and facts) can be freely used under Attribution-ShareAlike license, unless stated otherwise. Cite this article:
Pale Male Facts for Kids. Kiddle Encyclopedia.