Bethesda Terrace and Fountain are two architectural features overlooking the southern shore of the Lake in New York City's Central Park. The fountain, with its Angel of the Waters statue, is located in the center of the terrace.

Bethesda Terrace's two levels are united by two grand staircases and a lesser one that passes under Terrace Drive. They provide passage southward to the Central Park Mall and Naumburg Bandshell at the center of the park. The upper terrace flanks the 72nd Street Cross Drive and the lower terrace provides a podium for viewing the Lake. The mustard-olive colored carved stone is New Brunswick sandstone, with a harder stone for cappings, with granite steps and landings, and herringbone pattern paving of Roman brick laid on edge.

From the same viewpoint in 2008

Bethesda Terrace and Fountain form the northern end of the Central Park Mall, the only formal feature in the park's original blueprint, the Greensward Plan.

Construction of the terrace and fountain occurred during the American Civil War. Only two major structures besides the Bethesda Terrace were completed during the Civil War: the Music Stand and the Casino restaurant, both demolished. By the end of 1861, work on Bethesda Terrace was well underway. The stonework to be installed in the terrace arrived in 1862, and the masonry of the fountain was installed by 1863. In 1864, the stonework of Bethesda Terrace was completed except for minor details, and the Central Park commission hired a sculptor to design the figures for the Fountain. The upper level of the Terrace was mostly built by 1867, by which time the Fountain's figures were being cast in bronze. The Bethesda Fountain was officially completed in 1873. 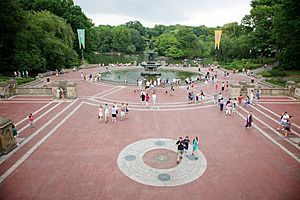 Bethesda Terrace became a site for an outdoor luncheon restaurant at the end of the 1960s, then became a congregating spot for the Hair generation. The Terrace, designed by Calvert Vaux with sculptural decoration by Jacob Wrey Mould, was restored in 1982, its stonework disassembled, cleaned, deteriorated surfaces removed, restored, patched, and reset. Resodding, and 50 new trees, 3,500 shrubs and 3,000 ground cover plants specified by Philip Winslow followed in 1986. However, after having matured into dense blocks, these plants were removed in 2008 to make way for plants native to the United States.

The Mintons encaustic tiles of the ceiling of the arcade between the flanking stairs, designed by Mould, were removed in the 1980s renovation because the New York City Landmarks Preservation Commission deemed the tiles too costly to restore. Instead, the Commission approved the commission of a ceiling mural in its place. Mayor Ed Koch declared in June 1987 that the tiles would be restored. Nevertheless, the tiles sat in storage for more than 20 years until the Conservancy received a private donation for their restoration. The Conservancy embarked on a $7 million restoration effort to return the Minton tiles in 2004. A team of seven conservation technicians cleaned and repaired more than 14,000 original tiles by hand. Only three panels of replica tiles were needed to replace those that had been damaged beyond repair. For those recreations, the Conservancy decided to commission Maw and Company, Minton's successor in Stoke-on-Trent, England. The tiles were reinstalled in 2007.

Following an illustration in an 1891 book by the Superintendent of Planting in Central Park, Vaux's assistant and partner, Samuel Parsons, the lower basin once again has water lilies, lotus, and papyrus, grown in removable pots. 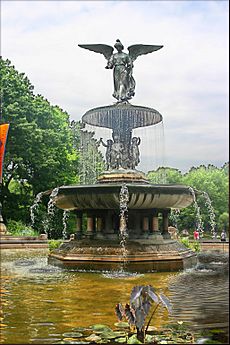 Bethesda Fountain is the central feature on the lower level of the terrace, constructed between 1859 and 1864, which is enclosed within two elliptical balustrades.

The pool is centered by a fountain sculpture designed by Emma Stebbins in 1868 and unveiled in 1873. Stebbins was the first woman to receive a public commission for a major work of art in New York City. The bronze, eight-foot statue depicts a female winged angel touching down upon the top of the fountain, where water spouts and cascades into an upper basin and into the surrounding pool. It was the only statue in the park called for in the original design. Beneath her are four four-foot cherubs representing Temperance, Purity, Health, and Peace. Also called the Angel of the Waters, the statue refers to Healing the paralytic at Bethesda, a story from the Gospel of John about an angel blessing the Pool of Bethesda, giving it healing powers. In Central Park the referent is the Croton Aqueduct opened in 1842, providing the city for the first time with a dependable supply of pure water: thus the angel carries a lily in one hand, representing purity, and with the other hand she blesses the water below.

The base of the fountain was designed by the architect of all the original features of Central Park, Calvert Vaux, with sculptural details, as usual, by Jacob Wrey Mould. In Calvert Vaux and Frederick Law Olmsted's 1858 Greensward Plan, the terrace at the end of the Mall overlooking the naturalistic landscape of the Lake was simply called The Water Terrace, but after the unveiling of the angel, its name was changed to Bethesda Terrace.

The panels of carving in the abstracted organic style propounded by Owen Jones, a mentor of the sculptor Jacob Wrey Mould are organized by an iconographical program of themes: the Seasons, the Times of Day, the Ages of Mankind. Considerable latitude was offered the carvers executing the work, following Ruskinian principles.

By the 1970s, Bethesda Fountain was completely dry. However, the fountain was restored in 1980-1981 by the Central Park Conservancy as the first part of its plan to renovate Central Park.

All content from Kiddle encyclopedia articles (including the article images and facts) can be freely used under Attribution-ShareAlike license, unless stated otherwise. Cite this article:
Bethesda Terrace and Fountain Facts for Kids. Kiddle Encyclopedia.