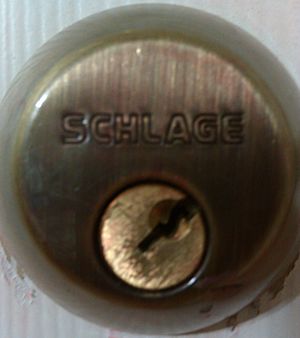 A deadbolt lock that has been picked, showing that the plug has been turned without the key.

Lock picking is the art of opening a lock without the key and without damaging or destroying the lock or its door. It is usually used by locksmiths to let people back in who have lost their keys or locked them inside a car or house. Lock picking is very rarely used by criminals, because picking a lock is difficult and other ways of entering such as breaking a window are much easier. Some people pick their own locks as a hobby. In most places picking locks that you own is legal, but it is illegal to pick locks that you do not own or do not have permission to pick. 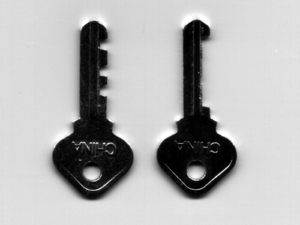 A padlock skeleton key (warded lock pick) that can open any lock with this keyhole (right), compared to a normal key that can only open the lock that it was made for (left).

Warded locks are the simplest locks to pick and are picked by inserting a warded lock pick (also called a skeleton key) into the keyhole and turning it as if it were the key. A pick for warded locks can be made by filing down all of the teeth on a regular key except the last one, or for some locks, the last two. 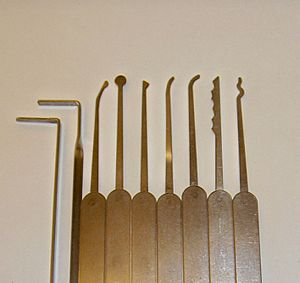 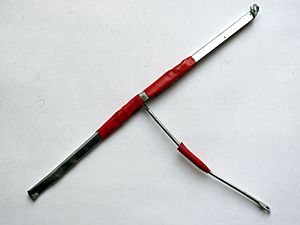 Lock pick made from an umbrella hinge. Used in car theft in Helsinki

Most padlocks can be opened by inserting a thin piece of metal called a shim between the shackle and the body of the lock. This will need to be done on both sides if there are locking levers on both sides. The shim pushes the locking latch aside and allows the lock to open. High-security padlocks often use a ball-bearing latch, which can not be pushed aside with a shim. Some door locks can be shimmed with a credit card or similar thin plastic object. The card is placed between the door and doorframe, which pushes the latch aside. Combination locks can not be picked, but it is often possible to find the combination by feeling for certain clicks inside the lock, except on certain high-security safe locks. Some combination locks have small cracks through which the parts inside the lock can be seen, allowing the combination to be determined. The Master Lock #175 brass combination lock has a very unique flaw allowing a small piece of metal to be inserted into the bottom of the lock, which pushes the locking bar aside, opening the lock. A special pick exists for disc-detainer locks, but it is only effective on inexpensive locks that do not have false gates. A well-made disc-detainer lock with false gates (such as the Abloy Protec) is considered almost impossible to pick. Lever locks are considered difficult, although possible, to pick and also require a special pick. Tubular locks can be picked with a special tubular pick. Some poorly-made tubular locks can be picked with an ordinary writing pen. Most car locks can be defeated by inserting a metal or plastic rod with a small hook on the end into the area between the rubber seal on the window and the car body, and using the hook to pull the lock lever that is normally pulled by hand from the inside of the car. On most cars, it is possible to electrically connect the switch contacts on the ignition lock to start the car without a key, completely bypassing the mechanical lock. This is called hotwiring the car. Most cars use a wafer-tumbler based lock, so it is also possible to pick the door or ignition locks the traditional way. Some cars, such as many Honda and BMW models, have electronic protection against both hotwiring and traditional picking.

All content from Kiddle encyclopedia articles (including the article images and facts) can be freely used under Attribution-ShareAlike license, unless stated otherwise. Cite this article:
Lock picking Facts for Kids. Kiddle Encyclopedia.