The W Regional Park is a major national park in West Africa. It is formed around a meander in the River Niger shaped like a "W". The park includes areas of the three countries Niger, Benin and Burkina Faso.

The W National Park of Niger was formed by decree on 4 August 1954. In 1996 it was listed as a UNESCO World Heritage Site. 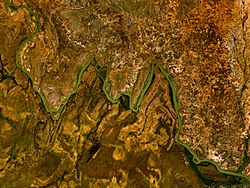 Bends in the River Niger which give W National Park its name.

In the three nations, the Regional park covers about 10,000 km². Almost no people live in this area.

The park is known for its large mammals, including aardvarks, baboons, buffalo, caracal, cheetahs, elephants, hippopotamuses, leopards, lions, serval and warthogs. The park has a home for some of West Africa's last wild African Elephants. The W Park used to have packs of the endangered Painted Hunting Dog. The National Park is one of the last strongholds for the Northwest African cheetah. There is a small but increasing population of at least 15-25 animals of this rare cat in the park.

The W area is also known for its bird populations. There are over 350 species identified in the park.

All content from Kiddle encyclopedia articles (including the article images and facts) can be freely used under Attribution-ShareAlike license, unless stated otherwise. Cite this article:
W National Park Facts for Kids. Kiddle Encyclopedia.