Oroville is considered the gateway to Lake Oroville and Feather River recreational areas. The Berry Creek Rancheria of Maidu Indians of California is headquartered in Oroville.

Oroville is located adjacent to State Route 70, and is in close proximity to State Route 99, which connects Butte County with Interstate 5. The city of Chico is located about 23 miles (38 kilometers) northwest of the city, and the state capital of Sacramento lies around 70 miles (112 kilometers) to the south.

Oroville's nickname is the "City of Gold", basically just the Spanish name of the city in English. Oroville has also been declared a Tree City USA for 41 years by the National Arbor Day Foundation.

Oroville is situated at the base of the foothills on the banks of the Feather River where it flows out of the Sierra Nevada onto the flat floor of the Sacramento Valley. It was established as the head of navigation on the Feather River to supply gold miners during the California Gold Rush.

The town was originally called "Ophir City", but the name was changed to Oroville when the first post office opened in 1854 ("oro" is "gold" in Spanish). The City Of Oroville was incorporated on January 3, 1906.

Gold was found at Bidwell Bar, one of the first gold mining sites in California, bringing thousands of prospectors to the Oroville area seeking riches. Now inundated by the waters of enormous Lake Oroville, which was filled in 1968, Bidwell Bar is memorialized by the Bidwell Bar Bridge, an original remnant from the area and the first suspension bridge in California (California Historical Landmark #314). In the early 20th century the Western Pacific Railroad completed construction of the all-weather Feather River Canyon route through the Sierra Nevadas giving it the nickname of "The Feather River Route". Oroville would serve as an important stop for the famous California Zephyr during its 20-year run. In 1983, this became a part of the Union Pacific Railroad as their Feather River Canyon Subdivision. A major highway, State Route 70, roughly parallels the railroad line winding through the canyon. 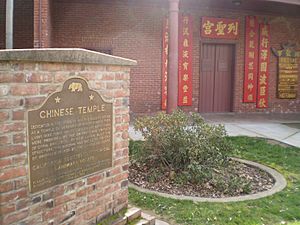 The Chinese Temple (CHL #770 and listed on the National Register of Historic Places) is another monument to Oroville's storied past. Chinese laborers from the pioneer era established the Temple as a place of worship for followers of Chinese Popular Religion and the three major Chinese religions: Taoism, Buddhism, and Confucianism. The Chinese Temple and Garden, as it is now called, has an extensive collection of artifacts and a serene garden to enjoy.

The olive-canning industry was founded in Oroville by Freda Ehmann, the "mother of ripe olives." She built a large cannery in Oroville, and by 1900 was the president of the world's largest canned olive factory. Ehmann was a believer in women's suffrage and a friend of Susan B. Anthony

Ishi, Oroville's most famous resident, was the last of the Yahi Indians and is considered the last "Stone Age" Indian to come out of the wilderness and into western civilization. When he appeared out of the hills in East Oroville in 1911, he was immediately thrust into the national spotlight. The Visitor's Center at Lake Oroville has a thorough exhibit and documentary film on Ishi and his life in society.

Archaeological finds place the northwestern border for the prehistoric Martis people in the Oroville area. 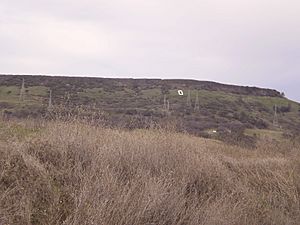 Oroville is situated at the head of navigation on the Feather River. The Yuba River flows into the Feather River near Marysville, California and these flow together to the Sacramento River. Geologically, Oroville is situated at the meeting place of three provinces: the Central Valley alluvial plain to the west, the crystalline Sierra Nevada to the SE and the volcanic Cascade Mountains to the north. It has a Mediterranean climate.

Oroville sits on the eastern rim of the Great Valley, defined today by the floodplains of the Sacramento River and its tributaries. Around Oroville these sediments are dominated by thick fans of Feather River sediments, but just east of this there is a thin, N-S band of late Cretaceous sediments. These sit on top of the Sierran basement, which beneath eastern Oroville comprise greenschist-facies metavolcanic rocks of Jurassic age, giving way to granites of the Sierra batholith to the east. These are manifestations of a vigorous island arc sequence, built out over an east-dipping subduction zone of mid-to-late Mesozoic age. The gold veins lace this ancient arc, remobilized by Mesozoic shearing and intrusions of igneous rock. The crystalline foothills are locally overlain by a Cenozoic sequence of Eocene clean beach sands overlain by Neogene volcanics, including the Diamond Head-like profile of "Table Mountain".

According to the Köppen Climate Classification system, Oroville has a warm-summer Mediterranean climate, abbreviated "Csa" on climate maps.

According to US climate data, on the average Oroville receives 30.7 inches of precipitation per year, which is about 20% less than the national average, but somewhat higher than the average California rainfall.

Oroville is home to a considerable number of ethnic Hmong. The Hmong migrated from Southeast Asia, especially from the country Laos, after the Vietnam War. The Hmong were allies of the American forces during the Vietnam War, many were recruited to help fight the Communist-aligned North Vietnamese forces in Laos and Vietnam. The Hmong people were given blanket political asylum after the fall of Saigon to the NVA in 1975. Every year there is an annual festival during autumn which was originally a harvest festival but now called the New Year celebration. In 2010, 773 people of Hmong descent lived in the city of Oroville, 726 in South Oroville, 640 in Thermalito, and 140 in Oroville East. In 2010, the Oroville/Chico Hmong community was the 9th largest in the Western US.

In the 1950s, a community of Romanians migrated from Europe, with 560 remaining at the time of the 2010 census.

Native Americans made up 3.7% of Oroville's population in 2010. The largest tribal group is the local Maidu. The Berry Creek Rancheria of Maidu Indians of California is headquartered in Oroville, with 306 members. The world's largest museum of Maidu culture is located in Oroville East, at the Lookout Museum.

In the early 1970s, the movie The Klansman was filmed in Oroville.

This Is Oroville, a novelty song recorded and released as a 45 rpm single in 1987 by local teacher Steve Herman, is generally considered to be among the more popular California 'city songs'.

The economy of Oroville is largely driven by tourism to Lake Oroville and the Feather River recreation areas. The largest industries in Oroville as of 2017 are: Healthcare and Social Assistance (20%), Retail Trade (11%), and Accommodation and Food Service (10%).

As the neighboring city of Chico experiences growth in retail, education, and technology industries, Oroville has experienced population growth associated with commuters attracted to lower property costs, and a smaller cost of living. Recently, Oroville has seen an increase in economic development. Oroville Hospital announced in 2018 a hospital expansion, and in 2019 received $200 million in bonds for a five-story hospital tower expected to be competed in 2022. Notable retailers who have expanded to Oroville in the past few years include: Ross Dress For Less, Marshalls, Starbucks, and Chipotle Mexican Grill.

According to the city's 2015-2016 Comprehensive Annual Financial Report, the top employers in the city are:

Several small, rural school districts are in the surrounding areas.

Oroville Hospital is a general acute care hospital and offers basic emergency care located in the City of Oroville.

The Oroville Fire Department is responsible for calls within the city jurisdiction of approximately 13 square miles (34 km2) with a population of 16,260 (as of 2015).

Oroville has three designated superfund cleanup sites, two of which have been cleaned up and delisted: a Koppers Co. wood treatment plant, a Louisiana Pacific sawmill, and the Western Pacific railyard.

The Louisiana-Pacific sawmill was listed on June 10, 1986, for pentachlorophenol PCP, dioxin, furan, heavy metals (arsenic, boron, and copper), and polycyclic aromatic hydrocarbon (PAH) contamination. Following remediation, the site was delisted on November 21, 1996. The sawmill was shut down in 2001.

The Western Pacific Railroad yard was listed on August 30, 1990, for volatile organic compound (VOC) and heavy metals (arsenic, lead, and chromium) contamination. Following remediation, the site was delisted on August 29, 2001.

All content from Kiddle encyclopedia articles (including the article images and facts) can be freely used under Attribution-ShareAlike license, unless stated otherwise. Cite this article:
Oroville, California Facts for Kids. Kiddle Encyclopedia.