San Leon is a census-designated place (CDP) in Galveston County, Texas, United States. The population was 4,970 at the 2010 census.

For more details, see History of the Galveston Bay Area

During the early 19th century the pirate Jean Lafitte who ruled Galveston Island established a stronghold at Eagle Point in modern San Leon. Eagle Point went on to become an important shipping and trading post for slaves. A community was established, known as Edward's Point and later North Galveston. When the North Galveston, Houston and Kansas City Railroad was built through the area in 1893 the town began to develop as a commercial center. However, following the hurricanes in 1900 and 1915 the town was devastated and never able to fully recover. Attempts were made in the early 20th century to establish a resort community in the area, but these efforts met with only modest success. Growth and development since this time have been relatively stagnant. 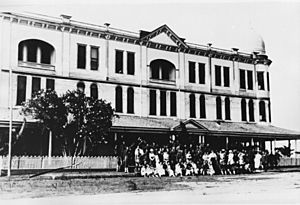 Unidentified gathering in front of the San Leon Motel 1914-1920

In April 1985 residents of San Leon, Bacliff, and Bayview considered an incorporation proposal to become the City of Bayshore. Judge Ray Holbrook signed an order for the election to take place on April 6, 1985, freeing the area, which had a population of 11,000, from the extraterritorial jurisdiction of League City and Texas City. Residents rejected the incorporation proposal. The vote was tallied with 1,268 against and 399 in favor. Proponents wanted a local police force and the ability to pass ordinances. Opponents said that the tax base was too small to support municipal services including police and road and drainage improvements.

San Leon was not in a 1986 proposal to incorporate that included Bacliff and Bayview. Donna Maples, vice president of the Bacliff - Bayview Community Association, said that historically San Leon had generated most of the opposition to incorporation proposals. She said "In the past, San Leon has shown it is not interested in incorporation. So this time we decided not to include them. They don't have as much in common as we do."

On April 23, 1991, the community, and other areas of Galveston County, received an enhanced 9-1-1 system which routes calls to proper dispatchers and allows dispatchers to automatically view the address of the caller. On September 13, 2008, San Leon, TX received extensive damage from Hurricane Ike.

In 2000 Bacliff and San Leon formed a nine-member board to prepare the communities for incorporation. At that time Bacliff and San Leon had a combined population of 10,000. The board was to have three members from the Bacliff area, three members from the San Leon area, and three at large members. It was prompted after the City of Texas City suddenly annexed several commercial parcels along Texas State Highway 146 between Kemah and Dickinson Bayou in the year 2000. The board hoped to convince Texas City to reverse the annexation.

In 2012 the P.H. Robinson electric generation plant formerly operated by Texas Genco, located in the area, was demolished.

Map of the San Leon CDP

Shore erosion had affected San Leon. Avenue A was built along the north shore. By 1997 it was no longer contiguous because portions had been destroyed by erosion.

Bayshore Spillway Park is located in San Leon. The San Leon-Bacliff-Bayview Chamber of Commerce holds its annual Jumbo-Gumbo and Barbecue Cookoff there.

T.J. Aulds of The Galveston County Daily News said that San Leon, Bacliff, and Bayview "are known for great spots to eat seafood." As of 2012 the most popular restaurant in San Leon is Gilhooley's. Aulds said that Gilhooley's was "known for its fresh oysters."

Every April the "Where the Hell is San Leon Festival" occurs. The festival includes live music, a "mayoral election" for the honorary mayor, and a tobacco-rolling contest. Because non-locals had difficulty finding San Leon, the festival was started in 2000 by a local newspaper editor as a joke referring to the difficulty in finding San Leon.

The honorary mayor of San Leon is Kelly M. Abbitt. Abbitt was elected during the festival on April 20, 2013, defeating long-time incumbent Keith Heinz.

Honorary Mayor Abbitt was re-elected in a landslide April 19, 2014. His campaign raised over $7,600 which will be put towards the acquirement and construction of a new parking facility for the Bayshore Youth Sports Association softball and baseball fields.

Honorary Mayor Kelly Abbitt was again re-elected in 2015 raising a record-breaking $10,800. Proceeds went to various local charities such as The San Leon Cub Scout Troop, ensuring that each child that wished to go to camp was able regardless of their financial situation, Hearts of Sunset, Sisters Helping Sisters, Steve's Organized Bunch and the American Legion.

All content from Kiddle encyclopedia articles (including the article images and facts) can be freely used under Attribution-ShareAlike license, unless stated otherwise. Cite this article:
San Leon, Texas Facts for Kids. Kiddle Encyclopedia.