Estherwood is a village in Acadia Parish, Louisiana, United States. The population was 889 at the 2010 census. It is part of the Crowley Micropolitan Statistical Area.

The Estherwood area had two earlier names, Tortue, after the Indian chief, and Coulée Trief or Trive. The Coulée Trief name involves Jean-Baptiste Trief, a mysterious person believed to have been one of Jean Lafitte's pirates, who built a cabin on the coulee, about 6 miles (10 km) west of Crowley, Louisiana, about 1816. He was described as a "tall, dark, sinister-looking" man who wore large earrings like pirates once did.

There are several stories about how Estherwood got its name. A likely one is that it is the combination of two names: Wood, for a Dr. Wood who was once prominent in the area, and Esther, for the wife of a railroad executive. Another is the wood part may come from the fact that the trains stopped for fuel wood here.

Jacob Kollitz and A. D. LeBlanc established stores near the Trief cabin in the early 1890s, and a little settlement began to grow around them. Kollitz also operated the 15-room Estherwood Hotel for a time, but it was closed in 1907.

The settlement began to grow just after the turn of the century with the Miller-Morris Canal, one of the first large rice irrigation systems, which helped establish the rice industry in the area, followed in 1900 by the opening of the Eureka rice mill at Estherwood.

By the spring of 1900, there were more than 30 residences in the town, new streets were being graded, and sidewalks were being put down. A chapel was finished there in 1910 and ministered as a mission of St. John the Evangelist Church in Mermentau. Estherwood was incorporated as a village on March 12, 1901, and Henry Feitel was elected its first mayor.

According to the United States Census Bureau, the village has a total area of 1.9 square miles (4.8 km2), all land. 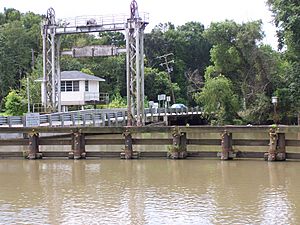 The pontoon bridge that leads into Estherwood

There were 291 households out of which 38.5% had children under the age of 18 living with them, 60.1% were married couples living together, 11.0% had a female householder with no husband present, and 25.8% were non-families. 22.7% of all households were made up of individuals and 11.0% had someone living alone who was 65 years of age or older. The average household size was 2.77 and the average family size was 3.28.

All content from Kiddle encyclopedia articles (including the article images and facts) can be freely used under Attribution-ShareAlike license, unless stated otherwise. Cite this article:
Estherwood, Louisiana Facts for Kids. Kiddle Encyclopedia.