Madisonville is a town in St. Tammany Parish, Louisiana, United States. The population was 748 at the 2010 census. It is part of the New Orleans–Metairie–Kenner Metropolitan Statistical Area. The ZIP code is 70447. 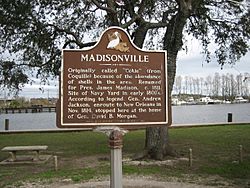 Historical marker next to the Tchefuncte River includes a reference to General Andrew Jackson's stop here late in 1814, en route to the Battle of New Orleans. David B. Morgan and other Madisonville residents were among the American defense forces at New Orleans; several of the men are buried in the historic Madisonville Cemetery.

Madisonville was founded by Jean Baptiste Baham in 1800, before the United States acquired this area, as the town of Coquille or Cokie because of the abundance of shells in the area, at the site of the Native American village of Chiconcte. The town was renamed in honor of President James Madison circa 1811.

Madisonville was an important port, providing bricks and other products of the towns along the Tchefuncte River to New Orleans, in the decades before the Civil War. After the Union capture of New Orleans, this area remained under nominal Confederate control; and the cutoff of trade with New Orleans across "enemy lines" was devastating to the local economy, which did not recover for decades after the peace.

The opening of the Lake Pontchartrain Causeway and associated highways gradually brought Madisonville into the sphere of Greater New Orleans, in the second half of the 20th century.

Much of the town flooded with the Lake Pontchartrain storm surge of Hurricane Katrina, in 2005. The police station was destroyed by the flood waters, along with the lower floors of the fire station. A temporary police substation was built by a Madisonville-based company, T. Sturdevant Inc/dba Barnstormers. The ruined police station was repaired by town workers and reopened for use, while the substation was left intact and is still used as the main office of the Chief of Police.

Frederick (Fritz) Jahncke emigrated to New Orleans from Hamburg, Germany in 1870. After working as a mason he started a business that built the first sidewalks in New Orleans. He expanded and using a rented steam-driven hydraulic suction dredge was the first to pull sand and shell from the Tchefuncte and other rivers to make concrete used in expanding New Orleans.

Fritz purchased a half interest in the Baham Shipyard entering into shipbuilding. In 1905 he purchased the remaining interest acquiring land for yards, as well as warehouses, docks, storage facilities and equipment. He died in 1911 and the company passed to Ernest Lee, Paul F. and Walter F. Jahncke. In 1917 the company started building five wooden ships for the US Navy for World War I. Two ships were completed, the The SS Bayou Teche was launched in March 1918, and the SS Balabac on Sept. 29, 1918. The war ended Nov. 11, 1918, less than two years after US involvement, and three of the ships were not completed. The SS Abbeville was completed on Jan. 19, 1919, and the SS Pontchartrain on April 6, 1919. The last ship was hauled across the river and burned. Part of the hull is still visible at low tide.

The Tchefuncte River Lighthouse is operated by the Lake Pontchartrain Basin Maritime Museum with a grant from the Institute of Museum and Library Services and the Southeastern Museum Conference, a gift from the Southeastern Louisiana University Development Fund that included live-streaming security cameras and on-site information about lake levels and wind and wave action by the Department of Computer Science, as well as contributions from private groups and individuals. The Tchefuncte River Lighthouse was placed on the National Register of Historic Places July 14, 1986. 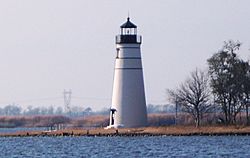 Madisonville's Tchefuncte River Lighthouse, viewed from the east, stands on the north shore of Lake Pontchartrain. This lighthouse was built in 1837.

There were 302 households out of which 21.9% had children under the age of 18 living with them, 44.7% were married couples living together, 10.6% had a female householder with no husband present, and 38.4% were non-families. 31.8% of all households were made up of individuals and 8.9% had someone living alone who was 65 years of age or older. The average household size was 2.24 and the average family size was 2.81.

All content from Kiddle encyclopedia articles (including the article images and facts) can be freely used under Attribution-ShareAlike license, unless stated otherwise. Cite this article:
Madisonville, Louisiana Facts for Kids. Kiddle Encyclopedia.