John Neely Kennedy (born November 21, 1951) is an American attorney and politician who is the junior United States Senator from Louisiana, serving since 2017. A member of the Republican Party, he previously served as Treasurer of Louisiana from 2000 to 2017.

Born in Centreville, Mississippi, Kennedy graduated from Vanderbilt University and University of Virginia School of Law before attending Magdalen College in Oxford, England. Kennedy was on the staff of Governor Buddy Roemer before unsuccessfully running for Attorney General of Louisiana in 1991. In 1999, he was elected Louisiana Treasurer. He was an unsuccessful candidate for U.S. Senate in 2004 and 2008. In 2007 while serving as treasurer, Kennedy switched parties from Democrat to Republican.

In 2016, Kennedy was once again a candidate for U.S. Senate. He came in first place in the November jungle primary and subsequently went on to defeat Democrat Foster Campbell in a December runoff before being sworn in on January 3, 2017. 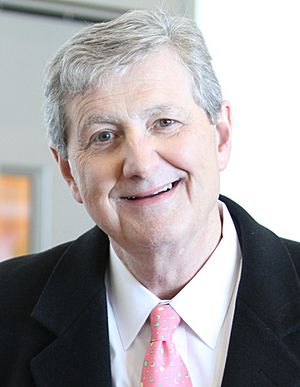 At Vanderbilt, he was elected president of his senior class and named to Phi Beta Kappa. After Vanderbilt, Kennedy received a J.D. degree in 1977 from the University of Virginia School of Law in Charlottesville, Virginia. At the University of Virginia School of Law, he was an executive editor of the Virginia Law Review and was elected to the Order of the Coif. In 1979, he earned a Bachelor of Civil Law degree with first class honours from Magdalen College, Oxford in England.

Prior to entering politics, Kennedy practiced law at the New Orleans and Baton Rouge firm of Chaffe McCall. Before he took office as state treasurer, Kennedy had served as appointed secretary of the Department of Revenue and was a legal counselor and secretary for then Governor Buddy Roemer.

He has also served as an adjunct professor at Louisiana State University's Paul M. Hebert Law Center in Baton Rouge.

Kennedy resides in Madisonville in St. Tammany Parish outside New Orleans with his wife, Becky, and son, Preston. He attends North Cross United Methodist Church in Madisonville. He is not related to the Kennedy family of Massachusetts.

All content from Kiddle encyclopedia articles (including the article images and facts) can be freely used under Attribution-ShareAlike license, unless stated otherwise. Cite this article:
John Neely Kennedy Facts for Kids. Kiddle Encyclopedia.