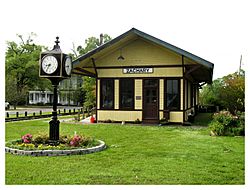 Much of the land which the city now occupies was part of a 160-acre (65 ha) farm owned by Darel Zachary (1827-1907). In the 1880s, Zachary sold his land to the Illinois Central Railroad, who built a track and a depot on it. A village quickly grew up around the depot, which came to be called "Zachary" after the original farmer. Zachary's first post office was opened in 1885, and it was incorporated as a city on August 2, 1889, with Thomas Edward McHugh as its first mayor. A fire devastated the city in 1903, supposedly caused by a greengrocer trying to flame-ripen his bananas. The "historic village" at the center of the city is composed of buildings which either survived the fire, or were built shortly after it, the oldest (excluding the depot) being the 1898 Allison House. The first census was carried out in 1914 and reported just 419 residents. Zachary was the first city in Louisiana since the Reconstruction Era to elect a Republican as mayor, Jack Louis Breaux. 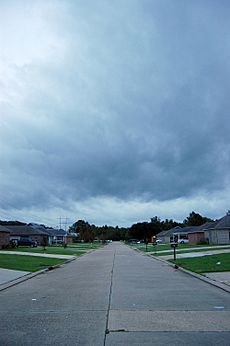 Zachary residents are served by the Zachary Community School Board.

East Baton Rouge Parish Library operates the Zachary Branch. In 1939 the library initially opened in the former town hall, and it subsequently moved to a former post office; a third building; and in 1966, in a structure attached to the Louisiana National Bank building. The library later began using the meeting room in the bank building. The current library opened on May 4, 2004, in a 20,000-square-foot (1,900 m2) structure on land purchased by the EBR library system in 2001. The groundbreaking for that building, designed by Cockfield - Jackson Architects, was held in December 2002.

All content from Kiddle encyclopedia articles (including the article images and facts) can be freely used under Attribution-ShareAlike license, unless stated otherwise. Cite this article:
Zachary, Louisiana Facts for Kids. Kiddle Encyclopedia.