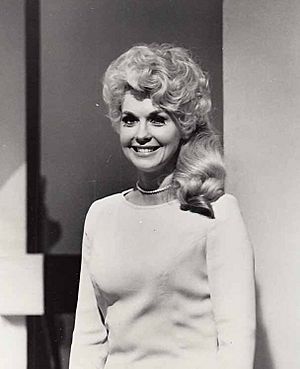 Donna Douglas (born Doris Ione Smith; September 26, 1932 – January 1, 2015) was an American actress. She was best known for her role as Elly May Clampett in the CBS television series The Beverly Hillbillies from 1962 to 1971. She also appeared in the series The Twilight Zone and the movie Frankie and Johnny (1966), alongside Elvis Presley.

Douglas was born in Pride, Louisiana. She had a son, Danny P. Bourgeois (born September 14, 1954). She was married twice, both ending in divorce.

All content from Kiddle encyclopedia articles (including the article images and facts) can be freely used under Attribution-ShareAlike license, unless stated otherwise. Cite this article:
Donna Douglas Facts for Kids. Kiddle Encyclopedia.